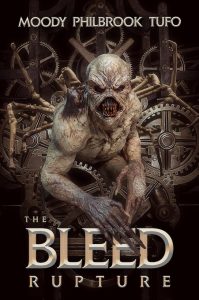 Synopsis:
A war is raging between gods and demons, with an unstoppable inter-dimensional terror – THE BLEED – destroying everything it touches. From ancient alien civilisations through to modern day London, through to deep space and beyond, nothing and no one is safe. The Bleed wants flesh. It wants to destroy life. It wants to be worshipped.

3 authors (David Moody, Mark Tufo and Chris Philbrook) have collaborated to create a multiverse on the brink of total annihilation. Rupture is the first book in a trilogy with a storyline spread across the known (and unknown) Universe.

Set in 3 locations: London (next week), The Moon (sometime in the future), Another World (another time), we are introduced to heroes, antagonists, Gods, bone crunching skull splitting monsters, magical runes and ancient texts. The sci-fi and fantasy elements work well alongside the earth/moon-bound sections. If you normally stick to only one genre, this book is a great crossover.

Bearing in mind these authors earn their bread and butter writing about apocalyptic events, I was surprised by one author in particular who displays a deft touch for writing some very funny lines for their character, injecting some levity to the situation, allowing the reader to draw breath.

The necessary world-building took place, but the story was not lost in set-up likes many opening books are. There’s enough gory carnage to satisfy the horror hound, fantasy that feels realistic, and a coherent tone throughout (Although fans of the individual authors will inevitably try to work how the story was divided). Nearly all the characters introduced are well fleshed out individuals, including some very likeable teenagers (a rarity in the horror genre), a dysfunctional family unit, and a savvy Londoner.

Satisfying to read, I really enjoyed this book, and eagerly look forward to the continuation of the story in the next one. Highly recommended.

THE BLEED: RUPTURE is released TODAY (July 14th) as a paperback, ebook, and Audible exclusive audiobook.