Synopsis:
After heading to their family’s beach house during the off season in the hope of reconnecting, troubled college sweethearts Emily (Liana Liberato) and Randall (Noah Le Gros) run into older couple Mitch (Jake Weber) and Jane (Maryann Nagel) and form an unexpected bond. But their peace is disturbed by increasingly strange environmental phenomena—and the unmistakable signs of infection… 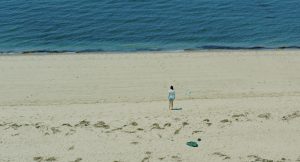 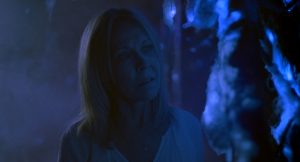 The ecological horror film is very easy to get wrong. Veer too far into preachy territory and you end up with a film like The Happening (2008) that muddles its messages and garners more laughs than scares. But every now and then, you come across a film that shows a clear understanding of the world and humanity’s tenuous place on it, tapping into a deep dread we all have that our extinction could happen any day now.

That’s exactly what writer-director Jeffrey A. Brown has achieved with his impressive debut feature The Beach House, a film that feels both intimate and somehow infinite. While the film is rooted in cosmic horror, Brown masterfully grounds it on our world—so when things do start spiralling beyond our compression, it continues to feel all too real.

This is achieved early in the film with a few mesmerising shots of bubbles swirling in a glass of wine and light shimmering on the pearlescent folds of an oyster, all while Emily, an organic chemistry student with an interest in astrobiology, describes the fragility of all life on the planet. Rather than using this moment solely to get some exposition across and establish his core themes, Brown takes the opportunity to build on Emily and Randall’s characters, with Randall almost immediately following his partner’s calm, thoughtful discussion of her studies with an agitated rant about growing disillusioned with institutions like school and marriage. It’s a nice way of showing how far apart they’ve grown, despite still feeling obvious love for one another, while also juxtaposing Randall’s existential dread with Emily’s sense of awe. 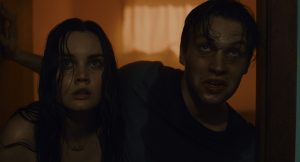 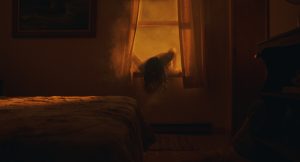 Brown takes his time introducing us to his small cast of characters, and though the slower pace of the first half of the film may leave some viewers fidgeting, it pays off in spectacular fashion around the midway point when things take a sudden turn for the disturbing. Here, too, Brown displays a patient approach; the first death we see is shocking for its mundanity, anchored by long, stationary shots that put us in Emily’s shoes, watching in disbelief as a character we’ve just gotten to know slowly dies in the distance. It’s a gut punch, and Brown doesn’t allow us to recover from it before hurling a swift uppercut our way, knocking us off our feet and leaving us scrambling. The rest of the film continues in much the same fashion, never allowing us to grow comfortable or find solid ground—and by the time it reaches its beautiful and upsetting climax, the viewer is left winded.

Much of the discomfort comes from the excellent practical effects work. The Beach House does betray its low budget in places with body parts that appear a little too rubbery if you look too close, but Brown wisely encourages us to look away by delivering some intensely squeamish scenes. The setting also helps, stranding our characters in a near-deserted town beside a great expanse of unfeeling, unknowable ocean. Combined with the rolls of thick, swirling “fog” that quickly swallow all, it all comes across as incredibly claustrophobic, contributing to the film’s breathless feel. 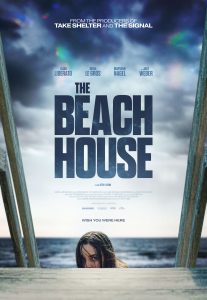 Unpredictable, uncomfortable, and dripping in atmosphere and goo, The Beach House manages to deliver on its promises of both cosmic and body horror, while also telling a compelling infection story. The initial slow burn might frustrate some viewers—but, much like the extinction cycle itself, once this one starts drawing toward its end, you’re powerless to do much else except sit back, watch, and try not to scream.