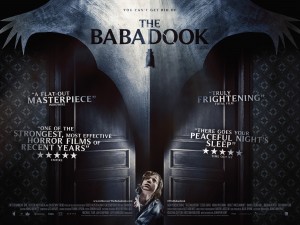 It’s usually the Daily Mail baiting parents of poorly behaved kids that use the catch all excuse of ADHT for their children’s behaviour rather than the fact that they’ve  been fuelling them with tartrazene riddled drinks & sugar soaked, fat packed snacks coupled with plop poor parenting but  the child in new Australian release, ‘The  Babadook’ has a more credible reason. With his father killed in a car crash as he is about to be born the boy finds that his widowed mother is finding it increasingly difficult to cope with his disturbed behaviour. Physically exhausted, mentally drained and at the end of her tether it culminates in her taking him out of school due to his penchant for taking his homemade weaponry into class.  Trying her best to be a good mother she reads him a bedtime story that has mysteriously appeared in his bedroom called The Babadook which until she’s read it to him finds it’s more sinister than anything Roald Dahl wrote with and the boy now believing the sinister Babadook is real and out to get them.

This is the first time feature by Australian Director Jennifer Kent and despite the impending sense of dread the centre of this is the mother-child bond between Essie Davis as the emotionally fragile mum coping with the 6 year old child from hell and for much of the film sympathies lie with the mother rather than the boy. Almost inevitably with his behaviour getting worse as he grows ever fearful of the Babadook it all becomes too much for her and she snaps at a children’s party unable to bear the faux empathy from other mothers, perfectly groomed in contrast to her, and ultimately more concerned for their own husbands superficial dilemma’s. Sympathies shift when a child at the party taunts the boy about his dead father and it serves to remind just how heartbreakingly cruel children can be to each other.

There are convincing performances by the two leads and Kent has elicited a great performance from Daniel Henshall as the disturbed child when initially it seems that he’d benefit more from a slap round the back of the head than any therapy but by the end sympathies are skilfully moved to the boy as he tries to care for his sleep deprived mother. Having lost his father and haunted by the Babadook his safety grows ever more precarious as his mother’s  maternal instinct evaporates and she finally turns against him too – a reminder of The Shining’s  Jack Torrance & Danny is never far away. The films trailer gives the impression that this is an out and out scare fest and whilst never really on a par with the sequences in the recent Annabelle, the Babadook, when it manifests itself is, impressively creepy as a mash up between Freddy Kruegar and a top hatted Jack the Ripper.

This became a fan favourite at this year’s London Frightfest and though it’s a horror film its handling of their fragile relationship set against the Babadook’s malevolent presence is really at the heart of the film.