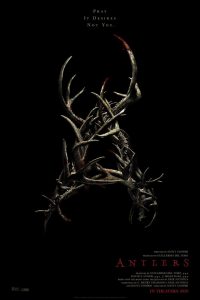 The first teaser trailer for the Guillermo del Toro-produced horror movie Antlers is here, along with a creepy new poster.

Directed by Scott Cooper, the film stars Keri Russel as Julia, a teacher in small-town Oregon. Along with her brother Paul (Jesse Plemons), the local sheriff, Julia becomes entwined with a young student (Jeremy T. Thomas) harbouring a dangerous secret.

Written by C. Henry Chaisson and Nick Antosca (Channel Zero, Hannibal), with revisions by Cooper, Antlers is based on Antosca’s short story “The Quiet Boy.” The film is slated for release in 2020.