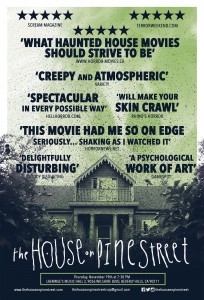 The House on Pine Street is a favourite of ours at SCREAM, because we love its simple yet effectively spooky take on the haunted house flick. Filmed on a meagre budget, Aaron and Austin Keeling drew upon their own sinister memories of living in a haunted house to create a film that follows a couple plagued by a supernatural entity of their own.

It has now been announced that Terror Films has acquired the U.S. rights to the film after closing a deal with Raven Banner Entertainment. When speaking about the deal, Joe Dain – a Terror Films executive – said, “We couldn’t be happier to be doing business with Raven Banner. Their taste in quality horror films is top notch.”

The House on Pine Street scooped up a variety of awards on its festival circuit including Best Feature at the New Orleans Horror Film Festival. So far, the film has a release slated for this summer, so look out for a new poster, trailer and specific release date soon.

For now, check out the new trailer for The House on Pine Street. It’s delightfully atmospheric with a chilling soundtrack that’ll be sure to get your heart pounding.

The House on Pine Street will be released on DVD in the UK 1st February and you check out our 5-star review here.