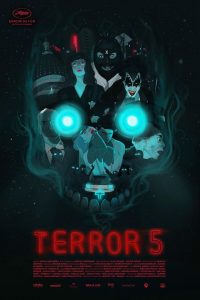 Argentinian horror anthology Terror 5 is an interesting exercise in sociopolitical horror, but viewers (including yours truly) not up to speed on the country’s political climate and history may find that the anthology doesn’t offer many other new ideas. Said to be based on urban legends from that country, the movie does present a unique slice of South American fear fare.

Politicians stand trial in Buenos Aires for possible misconduct surrounding the collapse of a building under construction. The disaster took many lives and the citizens await the outcome of the trial. Elsewhere in the city, a group of twenty-something friends harass and bully an acquaintance (“Senorita Virga”), another group of university students seek revenge on professors while an odd romance blossoms (“Colegio”), a couple has a sexual tryst in a motel room not knowing that they are being watched (“TTT”), and two men become involved with a woman who has a big surprise in store for them (“Marina y Mariana”).

The wrap-around story “Gritos” is the political trial one, but all of the tales are interwoven rather than being told one by one. The parallel tales work rather well together; however, I was a bit confused when one group was allegedly watching a snuff film that is later revealed as supposedly being filmed at the same time as all of the other Terror 5 events. There are other moments of confusion, as well, when trying to connect the stories together, but overall the stories are fine as stand-alone elements.

Without giving too much away, the tales range from that of vengeful corpses rising from their graves to borderline torture porn, with some surprises in between. “Colegio” kicks things off but feels tacked on once the movie is finished, because it is the only one not interwoven with the other stories. “Senorita Virga” is the most dramatic as its story of bullying is grounded in real life. “TTT” is the grittiest of the bunch, with sex and shower scenes aplenty before it gets to its harrowing climax. “Marina y Mariana” seems to have suffered the most in the dialogue translation department; at first I thought I was watching two detectives on a stakeout of the hotel in “TTT” before I realized I had very little idea of what was happening. “Gritos” feels like a political updating of an EC Comics type of tale by way of early John Carpenter. 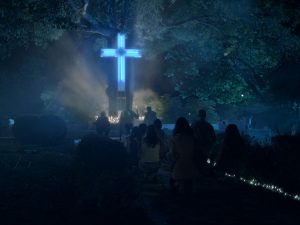 Sebastian Rotstein and Federico Rotstein direct from a screenplay by Sebastian and collaborating writer Nicolas Gueilbert. They use a variety of lighting and framing styles to give each segment a different flavor but show some unevenness in wrapping up the entire package neatly. Granted, some subtleties in both cultural translation and dialogue translation could be reasons for that, as well. Some errors in the English subtitles are one tip-off to that fact. Although Terror 5  has a decent share of shocks and suspense, its sudden jumps between stories sometimes stifles the tension.

The performances overall are carried out well, the cinematography is very good, and Sebastian Rotstein and Federico Rotstein establish themselves as talents on whom to keep an eye. Terror 5 is a horror effort that fans of international horror, especially from places not often represented in the scare-fare sweepstakes, should find worth seeking out.