Following in the footsteps of Tim Curry is a hard ask and Laverne Cox (Orange is the New Black) is not the only actor who is stepping into his shoes. Cox, of course, is to be the new Dr Frank-N-Furter in Fox’s TV remake of The Rocky Horror Picture Show and the footage we have seen of her has been, quite honestly, less than promising.

When it was announced that Bill Skarksgard was to be the new Pennywise in Stephen King’s It we’re sure that a lot of you groaned or expressed their disinterest in this new remake. However, Skarsgard could be a great choice for the role as he has an immediately striking look and has proved his acting abilities in Hemlock Grove, where he plays the role of Roman Godfrey; a complex character that has a lot bubbling below the surface of his apparently confident demeanour.

Check out the first terrifying image of Skarsgard below; we love the chipped paint that makes him look appropriately menacing and the ominous yellow eyes. This is definitely a great first look at Pennywise, but let’s hope this positivity carries on with future footage of It. 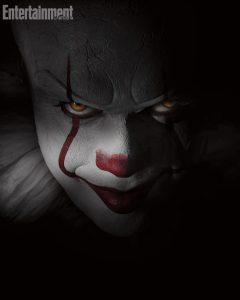 Andy Muschietti is tackling the daunting task of bringing It to the big screen once again and the script has been written by Gay Dauberman and Chase Palmer.  The new Losers’ Club stars Finn Wolfhard as Richie Tozier, alongside Jaeden Lieberher as Bill Denbrough, the club’s unofficial leader, Wyatt Oleff as Stanley Uris, Chosen Jacobs as Mike Hanlon, Sophia lillis as Beverly Marsh, Jack Dylan Grazer as Eddie Kaspbrak and Jeremy Ray Taylor as Ben Hanscom.

The first of the two It films will be released on 8th September 2017.