TERRIFIER 2 IS HAPPENING AND WILL FILM THIS YEAR

After Damian Leone’s short film Terrifier creeped out coulrophobics in the anthology horror film All Hallows’ Eve, its breakout villain Art the Clown got his own spinoff film in 2016. Also called Terrifier, the flick was such a hit that fans have been clamouring for a sequel ever since. And they’re in luck—the follow-up has been funded and will start filming this autumn.

Terrifier 2 will see Art the Clown being resurrected by a sinister entity and trying to hunt down a teenage girl and her younger brother on Halloween. On the film’s official Facebook page, Leone wrote this week: 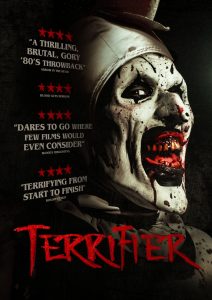 “Thank you all very much for your patience! We are thrilled to finally announce that Terrifier 2 is funded and slated to begin filming in the fall of this year! Our production company Dark Age Cinema is producing one again which means the inmates are still running the asylum. We are unchained and unrestricted, so rest assured, Terrifier 2 will be the merciless, no holds barred follow-up you’ve been hoping for. If you thought we pushed the envelope in part 1…you haven’t seen anything yet.”

“Now since the scope of Terrifier 2 is 10x bigger than the original, we can still really use your help! Thankfully, we’ve gotten numerous requests at conventions and on social media to launch a crowdfunding campaign for the sequel so that is our goal! In the coming weeks we will launch a small Indiegogo campaign with the hopes of raising some much needed additional funds.”

“Perks will range from social media shout outs to screen worn Art the Clown accessories, to even being killed by the man himself in Terrifier 2! If we reach our goal, the proceeds will go towards the biggest and most mind blowing scene in the script which requires an unprecedented amount of special effects, extras and stunts. Now although I cannot spoil the details of the scene, try to imagine if Art the Clown was in charge of the prom mayhem in Carrie! With your help, we can truly turn this scene into an unforgettable piece of horror cinema.”

“Again, we want to thank you from the bottom of our black hearts for your constant support and patience. We mean it when we say, the success of Terrifier is based solely on the dedication of our fanbase. In return, we want you to be involved every step of the way and we promise to deliver a film that surpasses your expectations!”

Are you excited to see more from Art the Clown? And will he give Pennywise a run for this money?