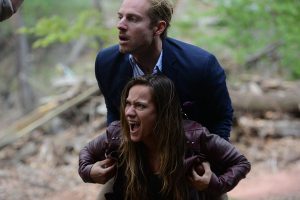 Being billed as a slasher for a new generation, Luciana Faulhaber’s Don’t Look has been acquired by Wild Eye Releasing, who will release it on VOD later in the year. Before then, the film will have its Los Angeles premiere this month at North Hollywood CineFest, and its Latin American premiere in April, at the Rock Horror Film Festival in Rio de Janeiro. By the looks of the new trailer, it most definitely has plenty to offer slasher fans.

The film follows five New York Millennials as they escape the big city for a rustic Thanksgiving weekend in the country. As we see in the trailer however, they get a couple of unexpected and it turns out, most unwelcome guests who give them little to be thankful for.

“It was important for me to create work that shows the female characters as they are in real life,” director and co-producer Faulhaber said recently. “None of us are waiting to be saved by some prince charming.”