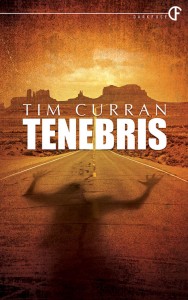 They don’t call Route 50 ‘the loneliest road in America’ for nothing, it’s not a road you want to break down on, no phone signal and you could end up with the worst kind of sunshine break. Jim, Rita and Dinah are traveling down Route 50 when a shape swoops down on them from out of the blackness, first disbelief, then dismissal and then ‘it’s coming’. An intense feeling of impending doom.

‘It was like being in a dark room and knowing, knowing someone was in there with you sharing the space. You could feel them but you could never really be sure where they were until they reached out and touched you.’

Then something hit the SUV, scraped along the roof with claws and Route 50 suddenly turns into the road to hell, and not due to Chris Rea singing. Panic stations, absolute terror and the vehicle flips of the road, Jim’s friends are literally ripped from the vehicle by something just a little bit frightening.

Conspiracy theorists are us contact him and Jim is drawn, quite willingly back to the scene of the incident, where he really, really shouldn’t go within a million miles of. It becomes an obsession that is never going to end well.

As monsters stories go this wasn’t one of Tim Currans best efforts, I kinda rode with it but, well, it was a gentle ride not one fraught with unnerving danger or scares. As folklore myths go, it was just too easy to find. I felt that if I went down Route 50 in a tank wearing a blindfold with earplugs in, I’d still run into this nightmare monster. I mean if you stood there and felt a sudden draft followed by a stench of death, then yep, it’s just flown over you. I wasn’t really bothered with any of the characters, they never felt real and I didn’t care whether any of them survived. In conclusion, it’s well written as all Tim Curran’s stuff is, some will love it, I didn’t.