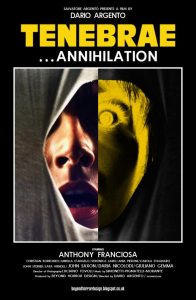 After exploring the supernatural in Suspiria and Inferno, the first two parts of his Three Mothers trilogy, Dario Argento returned to the giallo form which had made him famous ten years earlier. Though Tenebrae may seem flat and functional after such stylised films, it is sharp, intelligent and genuinely shocking, incorporating shades of psychoanalysis and dream theory into its circuitous narrative. It is also his most self-reflexive film, addressing the criticisms of misogyny Argento had received throughout his career. Though the plot, filled with clues and red herrings, is a little convoluted at times, Tenebrae is undoubtedly one of the finest films Argento ever made.

When author Peter Neal comes to Rome, he finds that a serial killer has started imitating the murders in his books, stuffing the victims’ mouths with pages of his latest bestseller, Tenebrae. But the killer isn’t just content with picking off beautiful women he considers sinful. He also has plans for Neal himself, plans which may threaten the author’s sanity as he attempts to reveal the killer’s identity.

Which, of course, is exactly what happens. Neal murders the killer and begins following in his footsteps, driven by a memory in which he is sexually humiliated by a girl on a beach (interestingly played by trans actress Eva Robins). The finale, one of the bloodiest scenes in any film ever made, is still as shocking as it was on release, and the final reveal of the killer has been widely imitated in recent years.

But despite its twisting narrative, Argento also manages to explore a number of interesting themes and ideas in Tenebrae. On one hand, the film can be read as an examination of the negative aspects of love and relationships (it’s no surprise to learn that Argento and Nicolodi were fighting during production). Tilde and her girlfriend argue passionately about their relationship; Bullmer is having an affair with his best friend’s wife; and most scenes contain couples fighting in the background. But perhaps the crux of the film is in Argento’s playful self-awareness, particularly when addressing the misogynistic undercurrent of his work. It’s no secret that Argento often filmed his own hands in place of the killers in his films, but in Tenebrae he takes it one step further, with Neal being questioned by the press about the sexism in his books.

Whether or not Tenebrae is a sexist film is, therefore, a bit redundant, but it is important to note that the killings in the film are almost all inherently sexual. Neal’s book is about “human perversion and its effects on society,” and the first killer makes no bones about labelling lesbians “dirty, filthy perverts.” Similarly, the murders in the film are largely erotocised, with two women being killed in a state of undress, and another being force fed as she’s throttled by the killer. When considering the ‘oral rape’ in Neal’s childhood and his use of a razor blade to obliterate the memory, it is clear that passivity and penetration go hand-in-hand throughout Tenebrae, culminating in Neal being penetrated again fatally in the final scene of the film. 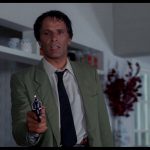 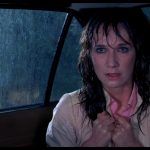 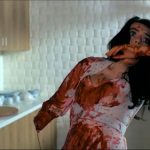 While Tenebrae lacks the colour and style of its supernatural predecessors, it is also Argento’s most confident work, stripping away many of the conventional horror motifs to create something fresh and exciting. It is ironic that the title is Latin for shadows or darkness as the film is usually brightly lit, with most of the scenes taking place in the middle of the day. One murder even takes place in a busy piazza (though how nobody spots the killer is anybody’s guess). Similarly, Tenebrae shows off some of Argento’s best camera work, specifically in the long tracking shot that is still talked about today. Here, the camera enters through the victim’s window, tracks across the rooftop, descends the opposite wall, and flies through a window as the killer breaks in. The shot in which Neal is revealed as the killer, hidden behind Germani, is also masterfully done, and still has the power to shock with repeated viewings.

No Argento film is complete without Claudio Simonetti’s music, and the score in Tenebrae is characteristically evocative. Throughout the film, Argento uses non-diegetic music to great effect, particularly in the aforementioned window scene. As the camera scales the house, the Tenebrae theme kicks in thunderously, only for it to be revealed that a character is listening to it on her turntable. In the flashback sequences, Simontetti uses light washes of twinkly synths, not unlike a child’s music box. This adds an eerie, dream-like quality to the nightmarish images on screen.

Widely regarded as Argento’s last great film (though I’d argue that Phenomena and Opera are also excellent), Tenebrae is a giallo as tight and thrilling as they come. Though I can name a wealth of films that have imitated Argento’s style in the film, Tenebrae – with its twisting plot and shocking finale – is truly a cut above the rest.