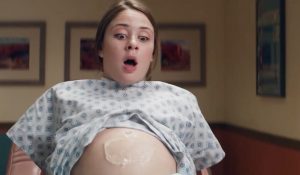 Pregnancy fears are nothing new in horror, with the likes of 1975’s I Don’t Want to be Born (aka Monster), 1990’s Baby Blood and of course, Roman Polanski’s horror classic Rosemary’s Baby all delivering various natal nightmares. Recently, the Natasha Lyonne/Chloe Sevigny starring Antibirth and Alice Lowe’s Prevenge have been flying the flag, and horror-comedy miniseries Snatchers – the first series from Warner Bros. digital imprint Stage 13 – will also be hopping aboard that train when it shows up exclusively on go90 on June 22nd.

When Sara wakes up the next morning nine months pregnant, she goes to the only person she can trust: her nerdy ex-best friend, Hayley. After a trip to the clinic turns horrific, Sara and Hayley realize this alien problem is only just beginning. Over the course of the night, Sara deals with her deadbeat baby daddy, a disapproving mom, and judgmental friends. Ultimately, this is a story of a girl finding self-worth and learning to accept her choices… by killing aliens.

New episodes of Snatchers will be available every Thursday on go90.com and the go90 mobile app. Things are about to get super cray.