Fresh out of CinemaCon, tech horror film M3GAN has got an unsettling new poster that really draws the eye… 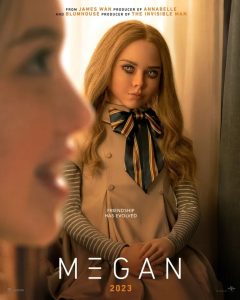 Directed by Gerard Johnstone (Housebound), the film is being produced by James Wan (The Conjuring) and stars Allison Williams (pictured above in Get Out), who also executive produced. Williams plays Gemma, a brilliant roboticist at a toy company who designs a lifelike doll. When her niece is orphaned, Gemma uses the M3GAN prototype to bond with the child. But this decision has unimaginable consequences when the robot becomes violently overprotective of her new friend.

Akela Cooper (Malignant) wrote the script for M3GAN, which is on a story from Wan. The film is slated to arrive in theatres on January 13th, 2023.