Teaser & Poster for THE SIMPSONS TREEHOUSE OF HORROR XXIX 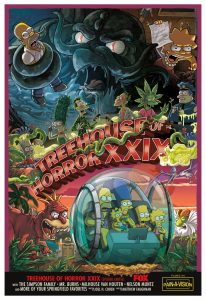 After 3 decades, the annual Treehouse of Horror episode of The Simpsons has become nearly as much of a Halloween tradition as trick or treating! We’re getting our first look at the upcoming, 29th installment, along with a release date for Season 30, both just revealed this weekend at San Diego Comic-Con. While we don’t get peeks at the 3 parodies fans can look forward to, we know for certain Invasion of the Body Snatchers will be getting a Simpsons-style reimagining as “Intrusion of the Pod-Y Switchers”.

The Simpsons Treehouse of Horror XXIX will hit small screens in October; the 30th season of The Simpsons begins around September 30th. Give the Treehouse poster (which looks to include spoofs of Stranger Things and Jurassic World)  and trailer a look-see (right and below).

According to Deadline:
“The usual suspects — Dan Castellanta, Nancy Cartwright, Julie Kavner, Yeardley Smith, Hank Azaria, Harry Shearer, et al. — are back to voice the 30th season of The Simpsons, which begins, appropriately, September 30 on Fox.”