The Teaser for Okja Shows a Monster in All of Us

A teaser has been unveiled for Netflix’s original film Okja from director Boon Joon Ho and it invites us to meet a brand new monster. The film is a coming-of-age tale about a young girl who is desperate to stop a large corporation from taking away her friend; a huge animal called Okja.

Synopsis:
Meet Mija, a young girl who risks everything to prevent a powerful, multi-national company from kidnapping her best friend – a massive animal named Okja. Following her across continents, the coming-of-age comedy drama sees Mija’s horizons expand in a way one never would want for one’s children, coming up against the harsh realities of genetically modified food experimentation, globalisation, eco-terrorism, and humanity’s obsession with image, brand and self-promotion.

Joon Ho is no stranger to tackling monster movies or films that explore important subjects, with Okja sounding like the love child of his previous films The Host and Snowpiercer. The teaser offers us a taste of the film’s melancholic tone with its stunning soundtrack and brief look into this harsh world that has been created.

Netflix is on a roll at the moment; with the recent I Don’t Feel at Home in This World Anymore, The OA, Santa Clarita Diet and the upcoming Bright, Death Note and Castlevania; the VOD service is becoming a content force to be reckoned with. 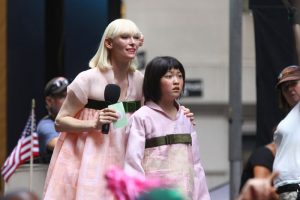