Teaser for Scare Campaigns Asks “Do you like Horror Movies?” 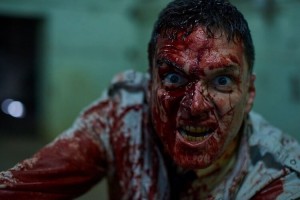 The Cairnes Brothers (100 Bloody Acres) are behind the upcoming Scare Campaign, which stars Olivia DeJonge (The Visit). The film follows a TV prank show that is determined to up its game after a new web series threatens to take its place.

Synopsis:
Popular TV prank show, Scare Campaign, has been entertaining audiences for the last five years with its mix of old school scares and hidden camera fun. But as we enter a new age of online TV, the producers find themselves up against a new hard-edged web series which makes their show look decidedly quaint. It’s time to up the ante, but will the team go too far this time, and are they about to prank the wrong guy?

Take a look at the perfectly intense 15-second teaser which only has one question: Do you like horror movies? Of course we do! It seems as though Olivia DeJonge is keen to have her name known in the horror film world, quickly leaving the slightly friendlier The Visit for a more visceral and gory endeavour.

Scare Campaign will be opening Australia’s Monster Fest on Thursday 26th November, so look out for those early reactions.