Quentin Tarantino has been swearing up and down the block that his upcoming thriller Once Upon a Time in Hollywood isn’t about Charles Manson; rather, it takes place in Los Angeles during the summer of 1969, when the Manson Family just so happened to be on a murderous jag. His insistence would definitely have carried more weight had he not intended to release the film on a very specific, and controversial date.

Sharon Tate, her unborn baby, three houseguests, and an unfortunate friend of her pool boy were all murdered by members of the Manson Family on August 9th, 1969. So, it can’t be coincidental that Tarantino originally plotted to unleash Once Upon a Time in Hollywood on what would have been the 50th Anniversary of the slayings. In a move probably designed to lessen the ire of those believing the film is exploitive, THR has just announced the release date has been pushed forward to July 26th, 2019.

As for how much Once Upon a Time in Hollywood will focus on the brutal demise of Sharon Tate remains to be seen. While many of the real-life players will appear as characters (in addition to Tate, the parts of Squeaky Fromme and George Spahn have been revealed) there’s no word on whether Manson himself will be portrayed. 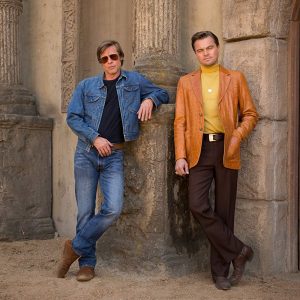 Big names in major roles include Brad Pitt, Leonardo DiCaprio, Al Pacino, Kurt Russell, Margot Robbie, Dakota Fanning, Burt Reynolds, and Timothy Olyphant (among many others). We don’t have a trailer or official synopsis, but IMDB states Once Upon a Time in Hollywood is about “a TV actor and his stunt double [who] embark on an odyssey to make a name for themselves in the film industry during the Charles Manson murders in 1969 Los Angeles.”