With its creepy cabin setting and wanton bloodshed, Quentin Tarantino’s latest The Hateful Eight may be the closest the iconic director has ever stepped towards an all-out horror film. Indeed, a number of early reports have seen it compared to both Evil Dead II and John Carpenter’s The Thing. The Western even apparently features unused music cues from the latter. 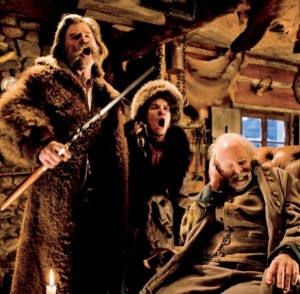 Tarantino’s love of horror is well documented and a few years back the director was in talks to write and direct New Line’s Ultimate Jason, which sadly never made it into production. 2007’s Grindhouse project with Robert Rodriguez was conceived as a love letter to the seedy era of 42nd Street fleapits, and though Tarantino’s entry, Death Proof riffed heavily on exploitation cinema, it is a car chase thriller above all else.

In a recent interview for Time Out, Tarantino made clear his desire to make a full-on horror: “If I had all the time in the world, I would love to make a really, really scary horror film, like The Exorcist. But I don’t know if me taking my sense of humor and putting it in the backseat just to hit a tone of dread from beginning to end is the best use of my talents or my time”.

“I don’t know if I could let go of that humor and be able to make something like The Exorcist and keep that tone of dread all the way through. Although a case could be made that The Hateful Eight is the closest I’ve ever come to a horror film. And more than any other Western, the film that influenced this movie the most is John Carpenter’s The Thing, way beyond just working with the same composer, Ennio Morricone, and star, Kurt Russell. The Thing also hugely influenced Reservoir Dogs, of course.”

Tarantino always seems to have countless projects in his sights that never see fruition, but there does seem to be a horror-shaped hole in his genre-hopping resume. I don’t know about you, but this one’s got me way too excited, way too soon.