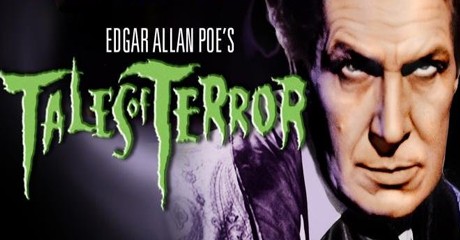 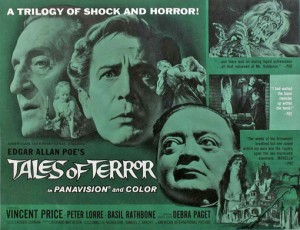 Synopsis
Director Roger Corman changed tact with this his fourth entry into the Corman/Poe cycle of films: Tales of Terror. The director mixed up his formula this time and delivered his content in the form of an anthology of stories rather than just one main focus, while also allowing for some lighter comedy themes to feature- an aspect which would be fully explored in the next film The Raven. Star Vincent Price flexes his gothic horror muscles in three lead roles;  an embittered widower and father, wine tasting genius lover and hypnotised ghoul in three stories adapted from the writing of Edgar Allan Poe- “Morella”, “The Black Cat” and “The Facts in the Case of M. Valdemar”

By the fourth effort Corman’s Poe adaptations were proving popular with audiences and although they might seem a bit twee by today’s standards they were considered quite frightening for their time and place.  The director was able to use the series to strengthen his voice as an independent filmmaker, while the films also cemented Vincent Price as a leading star for the genre. You could say the series was forward thinking in its approach too, being one of horror’s earliest franchises and the importance of this should never be underestimated.  Corman continually tried to mix up the pot as he went along, adding new elements while trying to keep the same overall tone of classic gothic horror, and Tales of Terror provides a perfect example of this experimentation. That is not to say that he always got it right, but then it would be a boring old world if the director had produced eight The Pit and The Pendulums; the highs and lows, and little nuances being a big part of the appeal for the series especially for the entertainment value in the amount of discussion it provides between fans who all have their own personal favourite moments.

Tales of Terror arrived hot on the heels of the third entry- arguably the weakest- Premature Burial (1962), which was the only film in the cycle to not feature actor Vincent Price. However Price’s welcome return in Tales is slightly hampered by the uneven pacing between the segments, although as with everything the actor turned his hand to he gives each role 110%. On this note Tales of Terror is not the most outstanding entry into the Corman/Poe cycle- in my humble opinion at least- but it is a film that has its moments and of course it comes with the delicious combination of Price bouncing off co-star Peter Lorre- a pairing which would return in Corman’s next entry The Raven (1963).

Morella: Based on the Edgar Allen Poe story of the same name Tales of Terror kicks things off with a bit of a sombre entry and one that is slightly lacklustre in contrast to the two other stories featured here. The story of a young woman, Lenora Locke (Maggie Pierce), who returns to her family home to find her father (played by Vincent Price) wrecked by grief for her late mother and his large mansion in a state of advanced disrepair. It transpires that Locke, unable to cope,  sent Leonora away after her mother Morella (Leona Gage) died shortly after giving birth to her and has keep a vigil by his wife’s rotting corpse ever since. But as the ice between the two starts to thaw and the family begins to heal old wounds, Morella reaches out from beyond the grave to ensure things take a sinister twist.
This is perhaps the weakest link in the anthology which is unfortunate as it is the opening slot and should technically be there to reel the viewer in. The segment is not a complete waste of time, however, and Price does give a marvellously camp performance as wildly wailing grief stricken widower who spits verbal venom out between mouthfuls of scotch; his performance almost doing a reverse stance from the one he takes in The Pit and the Pendulum- he starts off mad, and then gradually becomes more human as his character evolves. Co-stars Maggie Pierce as daughter Lenora and Leona Gage as Morella both provide some vintage glamour in their respective roles.

The Black Cat: Taken from Poe’s famous short story The Black Cat has been the basis for many horror films- especially in Italy with Fulci using the theme in his aptly named The Black Cat (1981), the Sergio Martino giallo Your Vice is a Locked Room and Only I have the Key (1972) and the Barbara Steele vehicle Castle of Blood (1964),to name but a few examples. Here Corman gives his adaptation a dark comedy twist pairing up Price with Peter Lorre as they go head to head as love rivals.

Lorre plays the abominable lush, and all round useless husband Montresor Herringbone- a man who would rather be drinking down at the local bar than looking after his pretty young wife who he leaves alone at home. Nasty and abusive it is a surprise that wife Annabelle (Joyce Jameson) puts up with him at all, but at least she has her trusty black cat for company. Herringbone on the other hand has a particular dislike for his wife’s female friend. While on one of his drinking benders Herringbone stumbles across the impressive and suave Fortunato Luchresi (Vincent Price), a world famous wine taster who becomes embroiled in a contest against Herringbone making the latter look like a drunken philistine much to the amusement of onlookers. Luchresi might not care very much for the odious Herringbone but takes a particular liking to wife Annabelle, a feeling which becomes mutual. Herringbone, on the discovery of this, seeks revenge on the two lovers to disastrous results.

Here Corman moves away from the usual gothic pomp of his other Poe work into lighthearted gallows humour, an approach he capitalised on fully when it came to his next feature in the series, The Raven. Lorre and Price generate a fantastic energy in their dynamic and with both actors having a strong capacity for comedy it makes for a great show. The segment is memorable for its camp leanings and tongue in cheek elements, especially with Price- in real life a consummate wine connoisseur, gourmet and man of culture- providing an able send up of a gregarious professional wine taster.

The Facts in the Case of M. Valdemar: The final piece goes for some shock value with a gruesome tale of a man hypnotised on his death bed and then manipulated from beyond the grave as his physical body lies decomposing. Vincent Price is M. Valdemar dying of a terminal illness who elects the services of hypnotist Mr Carmichael (Basil Rathbone) to provide a sort of ‘new age’ hypnotherapy service which will make his last moments more comfortable. What they don’t count on is Valdemar dying while in a trance and remaining at the beck and call of Carmichael who uses this to try and manipulate the dead man’s late widow Helene (Deborah Paget) into marriage.

After the highs of The Black Cat this parting shot fails to reach the same levels of entertainment – mainly as Price has little to do but lie in bed becoming more and more decomposed and provide a voice over- however it is certainly nowhere near as uninspiring as the opening act, and does at least have an engaging and partway violent ending that remains memorable after watching.
This disc from Arrow Video comes as part of their limited edition collector’s Blu-ray box set Vincent Price Six Gothic Tales and will also receive a standalone release to Blu-ray/DVD combo in early January 2015. Each edition is delivered with the following extras and specs.

Another fantastic presentation by Arrow- the Corman documentary is a real highlight for anyone wanting to know more about the huge contribution the director/producer has made to independent cinema. The transfer, as with the other  titles in this series, benefits from a great quality restoration to BD- presented in 1080p high definition- which keeps the original cinematic look and feel of the piece, shows off the bold use of colours in the production and presents a beautiful clarity in the detail without suffering from an heavy handed clean-up.

All in all while nowhere near perfect Tales of Terror is still a very worthy addition for any gothic horror lover’s collection for the fact that Vincent Price even when given less than stunning subject material could always summon up his inimitable magic onscreen. Perfect viewing for a cosy Sunday afternoon in front of the fire. 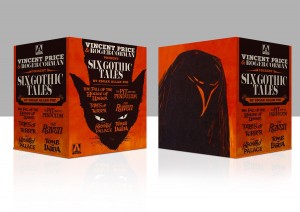