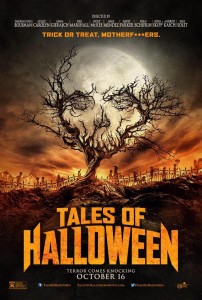 Synopsis:
Ten stories are woven together by their shared theme of Halloween night in an American suburb, where ghouls, imps, aliens and axe murderers appear for one night only to terrorise unsuspecting residents.

We are certainly experiencing the new wave of new wave horror anthologies right now with recent up to snuff franchises such as V/H/S and ABCs of Death. This year has brought with it a bit of a seasonal twist with both A Christmas Horror Story and Tales of Halloween doing the festival rounds. Putting the latter project under the microscope, Axelle Carolyn’s brainchild serves up ten twisted segments from 11 of the most predominant genre directors of the moment and has all the telltale signs of being more than capable of taking over the Halloween season as Paranormal Activity bids farewell.

Despite its clear penchant for all things Creepshow and the like, rather than a patchwork quilt of narratives all stitched together by a wraparound story, Tales of Halloween follows more of an ABCs of Death approach, keeping each segment separate. Having said that, everything remains amazingly succinct as the vignettes are kept as closely related as possible in terms of locations and aesthetics. The fact that pretty much the entire cast and crew worked in unison on the film must surely have played a big role in helping the audience appreciate the film more as an entire work of art rather than ten separate shorts.

That’s not to say there isn’t a bit of something for everyone of course. Most of the segments do tend to focus on good old-fashioned satirical horror but you can also expect two or three particularly gnarly slices of cake providing gore fiends with some particularly savoury segments to chomp on. Ultimately, the assortment The October Society has put together is an almost perfect amalgamation resulting in much less of a hit and miss affair than we are used to finding when it comes to anthology films.

Rather than delve into each and every segment, I thought it best to highlight a few segments that stuck with me slightly more than the rest:

Axelle Carolyn herself provides “Grimm Grinning Ghost,” a fantastically sinister story echoing some of Disney’s darker output. The mere fact it features Lin Shaye and Alex Essoe should already have you foaming at the mouth but the tension escalates at the perfect pace right up to a foreboding finale.

Pollyanna McIntosh is on fire when it comes to Lucky McKee’s “Ding Dong” segment, a dark and twisted take on fairy tales ranging from Hansel and Gretel through to the Wizard of Oz. I’ve seen McIntosh pull off all kinds of roles but you ain’t seen nothing like this before. She injects 100% funny and 100% evil both at the same time that you’ll love to hate her and hate to love her. Kudos definitely must also go to the pooch which looked dashing in costume…

A director I have seen little from before but who I can’t wait to see more from now is Ryan Schifrin. His segment “The Ransom of Rusty Rex,” loosely based on O. Henry’s short story “The Ransom of Red Chief” was so well executed. Sam Witwer, who steals the show (and quite possibly the whole film), and Jose Pablo Cantillo kidnap a fat-cat’s kid only to discover the joke is one them. I’m also sure Ben Woolf, who we sadly lost earlier this year, is looking down on us and feeling ever so proud of this parting gift he’s left us all to cherish.

Finally, my pick of the pack goes to Mike Mendez’ “Friday the 31st.” This guy never ceases to amaze me with each and every new project and he’s only gone and turned the slasher genre on its head with one of the wackiest premises ever. The short starts out akin to the Hatchet franchise and then an unexpected sci-fi element, replete with Lee Hardcastle style claymation, kicks in and will have you slapping yourself in disbelief. Mendez’ is by far one of the most imaginative and talented filmmakers on the scene right now and I can’t wait to see what he comes up with next.

This review wouldn’t be complete without pointing out that half of the fun comes in the form of Easter eggs and cameos. You’ll be hard pressed to spot each and every reference and some of the cameos are virtually unrecognisable. That fact alone will have you pressing play as soon as the credits roll.

I’ve waited a long time to be able to say this but Tales of Halloween is the first anthology film in years that doesn’t contain any segments that it could have done without. If I had to niggle at all I think I would have maybe preferred 4 or 5 longer shorts as opposed to 10 shorter ones just to give the directors time to flesh things out a little more but it was still a whole lot of fun. If the film’s final statement is anything to go by then we could be certainly be looking at a regular Halloween franchise. I could definitely get used to that because this broom totally fits and I absolutely urge you to fly it.

Tales of Halloween is scheduled for a limited theatrical release and through video on demand on October 16, 2015, by Epic Pictures.