Take a Zombie Safari in The Rezort Trailer 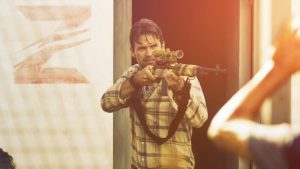 A new trailer has landed for Steve Barker’s The Rezort ahead of its US digital release on January 17th. The film is set in a time when humans have begun to rebuild the world following a devastating zombie outbreak. The titular island retreat is a closely controlled environment in which guests can pay for the cathartic pleasure of slaying zombies with no danger to themselves. Think Westworld with zombies and you’re not too far off.

I caught The Rezort at Frightfest last year and, while it hardly revolutionises the zombie film, it does place the undead flesh-munchers into a new environment, and has a lot of fun with the corporate, holiday camp setting. Here’s the official word:
The Rezort sets its story in a world after an almost-apocalyptic zombie outbreak. Humans have won the war and are exploring how humanity can recover after such a huge percentage of the population has been wiped out. 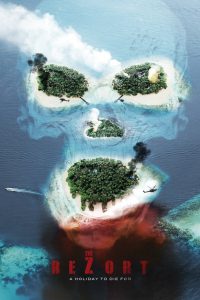 Humankind finally has the upper hand, but Melanie, who lost her entire family, is still deeply traumatised. In a bid to overcome the demons of her past, she goes on a zombie safari retreat. It is the ultimate in therapeutic revenge.

The Rezort is actually a highly controlled and monitored environment, with a maze of concealed security cameras, restraints and barriers. The eyes and ears of trained security personnel are on the guests 24/7, ensuring a safe shooting distance between the living and the undead. That is until the resort’s security system is hacked and a computer virus crashes it, potentially unleashing thousands of bloodthirsty zombies back into the wild.