Take a Trip to the Land of the Dead with Coco

It’s obviously not a horror film, but Disney-Pixar’s Coco has such a concern with death and quiet frights that we can’t help but be intrigued. In the playful, but emotive film, Miguel (Anthony Gonzalez) takes an unexpected journey to the Land of the Dead when he tries to prove his musical talent. 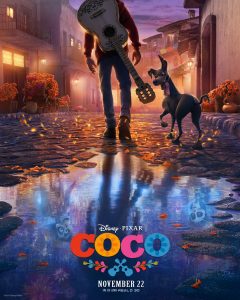 Synopsis:
Despite his family’s baffling generations-old ban on music, Miguel (voice of newcomer Anthony Gonzalez) dreams of becoming an accomplished musician like his idol, Ernesto de la Cruz (voice of Benjamin Bratt). Desperate to prove his talent, Miguel finds himself in the stunning and colourful Land of the Dead following a mysterious chain of events.

Along the way, he meets charming trickster Hector (voice of Gael García Bernal), and together, they set off on an extraordinary journey to unlock the real story behind Miguel’s family history.

Despite the obvious childish edge, it can’t be denied that the film’s themes of family and otherworldly afterlife may appeal to the older audiences. The striking resemblance to The Book of Life cannot be denied, but there is a lot to appreciate in the film’s colourful visual style and clear comedy flair.

Horror films for all the family? Yes please! Coco will be released in the USA on 22nd November.