Take to the Skies with this Poster for Swiss Army Man 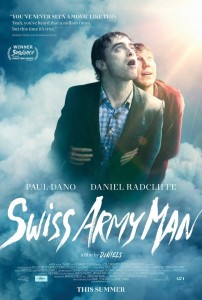 Swiss Army Man has one of the most bizarre concepts we’ve ever heard of and that has just got us more excited to see it. The film stars Paul Dano as a man stranded on a desert island who is about to take his own life, when a corpse, played by Daniel Radcliffe, washes up on the beach. The two then embark on a magical and slightly twisted journey and like, the poster shows, they literally soar into the clouds. Did we mention that the corpse farts?

Swiss Army Man was one of the main talking points after Sundance Film festival, with audiences either praising it as a work of genius or despising its excessive amounts of juvenile humour. Love it or hate it, it definitely sounds like something you won’t forget. To immerse yourself in directors Dan Kwan and Daniel Scheinert’s unique world, take a look at the trailer for Swiss Army Man below.

Swiss Army man will be released in the USA on 1st July 2016.