Take Shelter from this Clip for The Wave

A new clip for The Wave has been unleashed and it gives you a fantastic look at the effects the film showcases. This is one of the best disaster flicks to hit our screens in a very long time; it’s filled to the brim with action-packed sequences, tension and whole load of heart in there too. It’s the perfect recipe for a really enjoyable and nail-biting film experience. 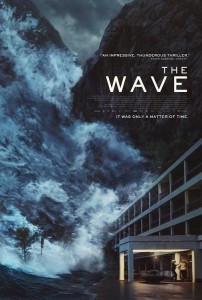 Nestled in Norway’s Sunnmøre region, Geiranger is one of the most spectacular tourist draws on the planet. With the mountain Åkerneset overlooking the village — and constantly threatening to collapse into the fjord — it is also a place where cataclysm could strike at any moment. After putting in several years at Geiranger’s warning centre, geologist Kristian (Kristoffer Joner) is moving on to a prestigious gig with an oil company. But the very day he’s about to drive his family to their new life in the city, Kristian senses something isn’t right. The substrata are shifting. No one wants to believe that this could be the big one, especially with tourist season at its peak, but when that mountain begins to crumble, every soul in Geiranger has ten minutes to get to high ground before a tsunami hits, consuming everything in its path.

Check out the clip below which shows the tsunami hit a small band of people in a hotel. As they rush to take cover in a bomb shelter, the wave crashes through the walls and leaves the group in a pretty helpless state of affairs. You’ll have to watch the film too see who – if anyone – makes it out alive.

The Wave is out now on VOD.