Take a Good, Long Stare at this Poster for Emelie 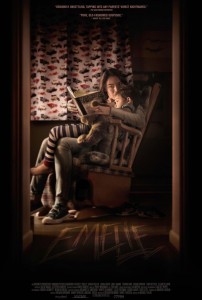 We are huge fans of Emelie at SCREAM, so we are pleased to show you this alternative one-sheet that is very creepy. It gives you a good look at the babysitter that has been called upon to look after three children and it perfectly encapsulates her double-sided personality. On the one hand, she’s quite a darling, but her piercing eyes are a gateway to her more sinister intentions.

Synopsis:
After their regular babysitter Maggie can’t make it, the Thompson family turns to her friend Anna to supervise their children while the parents go out to celebrate their anniversary. At first Anna seems like a dream come true to the kids, allowing them to eat extra cookies and play with things that are usually off-limits, but as her behaviour becomes increasingly odd, the kids soon find out that her intentions are dark and twisted, and she is not who she seems to be.

We will leave you with the trailer for the film which gives you a further look at the babysitter’s mad behaviour. Her seemingly simple demand, “stop smiling” is laced with an abundance of menace and is just a few of the ways she proves to be one of the most evil characters in horror.

Check out our review of the film here and be sure to purchase Emelie when it is released on 4th March.