Take a Bite out of the Poster for Slice 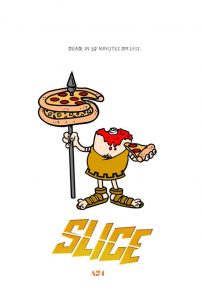 “Dead. In 30 Minutes or Less” could be one of my favourite horror poster taglines. Poking fun at pizza delivery services that promise a speedy arrival, the poster is delightfully cartoony; perfectly emphasising the film’s humorous approach to its horror tale.

In Slice, a city where ghosts and humans cohabit, a pizza delivery driver is murdered on the job and the residents wonder who’s guilty: ghosts? Drug dealers? Werewolves? Ghouls? We’ll have to watch the film to find out.

Slice will be released this year courtesy of A24; the distributor behind some of the best modern genre films, including Green Room, The Witch and Under the Skin – so, we can’t help but be immediately intrigued by Slice.

Remind yourself of the creative and fun teaser for Slice below.