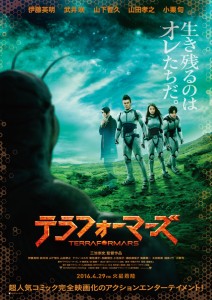 The end of April saw the Japanese release of Takashi Miike’s latest, Terra Formars, a live-action feature based on the 2014 anime. The prolific and celebrated director – known for Audition, Ichi The Killer, 13 Assassins, Gozu, etc, etc – now has nearly 100 directorial credits to his name, and looks to have found a good match for his talents here.

Terra Formars (‘for Mars’, geddit?) tells of a group of 21st Century scientists who send a probe to Mars to cover the red planet in a specially created algae designed to purify the atmosphere and make life possible. A bunch of cockroaches go along for the ride, the intent being that they will feed on and spread the algae. 500 years later, a manned mission to Mars takes place to investigate the results of the experiment. Very quickly though, all communications are lost. A second team are then sent up to check out what happened.

The team reach Mars, and life has flourished on the now green planet. At the top of the food chain up here are the descendents of the cockroaches sent up all those years back, who evolved into giant, vicious humanoids, intent on destroying human visitors to their world.

The below viral video was created to promote the film, and shows the tests of a sticky trap designed by the film’s scientists to ensnare the monster ‘roaches. A scientist, a sprinter and a sumo wrestler are the brave guinea pigs chosen to test its durability. Check out the results!

International release dates for Terra Formars have yet to be announced.