The 4K restoration of Suspiria has been doing the festival rounds this year, but fans will be able to experience the ultimate version of Dario Argento’s seminal masterpiece in their living rooms before Christmas. 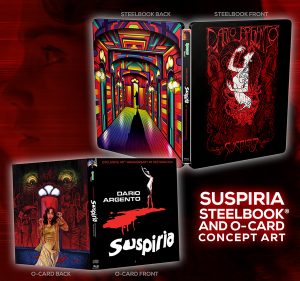 Synapse Films announced that their 3-disc special edition Blu-ray will be released on December 19th, in a beautiful steelbook and limited to 6000 copies, with a CD of Goblin’s remastered soundtrack. Synapse spent three years restoring the film, which is one of the most celebrated in horror’s history. The restoration was overseen and approved by Luciano Tovoli, the film’s Director of Photography on the film.

Here is the complete list of special features included on the release:

You get your pre-orders in now from Synapse’s website. And I strongly suggest you do.