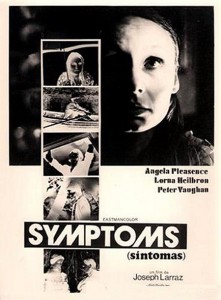 Synopsis:
Two friends visit a house in the country only to find themselves plagued by nightmares and the petrifying prospect that they might not be alone in the property.

Spanish director José Larraz (Whirlpool, Deviation, Scream… and Die!) was already making a name for himself as a horror connoisseur before his fourth film, and piece de resistance, Symptoms, became the official British/ Palme d’Or entry at the 1974 Cannes Film Festival. Lost for decades and listed on the BFI’s 2008 most wanted list until negatives were discovered six years later, Larraz’s primarily tender drama twirls into darker, more terrifying terrain as the story unfurls. With a sense of foreboding and possibly supernatural psychosis simmering throughout, Symptoms swiftly buds into unyielding horror for its nerve-wracking second act/ finale.

The story commences serenely with pensive protagonist Helen (Angela Pleasance/ Donald’s daughter) recalling dreams, dwelling on death and penning her diary as shots of an idyllic country backdrop instil an incongruous calm. Sunlight shimmering through tree-tops and sparkling on a lake’s surface can’t shake the sensation that something shifty is afoot while spliced stills of sex and death corroborates this suspicion, along with an unruffled, creepy score by John Scott (Black Rainbow, Satan’s Slave, The Wicker Tree) which adorns the serenity with a pinch of trepidation. 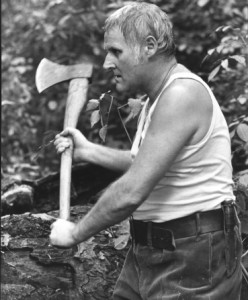 Discomfort is also cultivated by classic genre facets: handyman Brady (Peter Vaughn) has an air of Igor, a pinch of Klove (from Dracula: Prince of Darkness) and a crumb of the old coach driver who warns travellers to stay away from the castle. But Larraz resists clinging to the coat-tails of bygone Hammer to make Symptoms an audacious, progressive example of “modern” horror, more in the vein of The Wicker Man, Let’s Scare Jessica To Death, The Exorcist, The Texas Chainsaw Massacre and Don’t Look Now. Signifying a veer from the gaudy theatrics of Terence Fisher and Roger Corman and into a more mature, reality-based realm, inspired by Hitchcock and Polanski.

In a way, Larraz’s earlier film, from the same year; the erotic, claret soaked Vampyres, serves as a mark of transition between these two opposing styles, bridging components by subverting/ instinctively juxtaposing elements of both. Glaringly a tribute to Hammer with its gothic house and cloak donned blood suckers, Vampyres also shares similarities with Symptoms’ rural setting, rugged visuals and dogged (for the era) depiction of sex and violence. These meld well with the gaudier elements to make Vampyres a more significant picture than it initially appeared when released in the early 70s, alongside the more garish likes of Captain Kronos: Vampire Hunter, Blood for Dracula and The Legend of the 7 Golden Vampires, but it is nowhere near as courageous or refined as Symptoms. 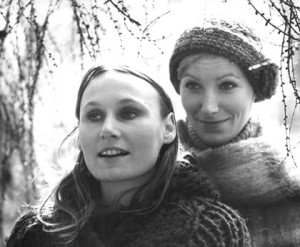 Symptoms’ slow-burning set-up shows Helen arriving at the mansion with Anne (Lorna Heilbron), charts the idyllic country backdrop and gets acquainted with the characters just in time for things to go spectacularly pear-shaped. Anne is established as the stronger of the two, Helen is revealed to be recovering from a break-up with a beau while Brady (the odd-job man who lives in the stables) puts the protagonists on edge with his constant, licentious staring. A scene featuring the two women drifting down a lake on a boat is so sedate it makes one pray for Jason Voorhees to burst from the water and flip them over in retaliation, but our patience is tested for just a short while before the cracks start to show, revealing Symptoms to be far from the gentle drama its set-up suggests.

The story flutters into a confident psycho/ gothic horror, seething with themes of sexual repression. The tone turns dark and terrifying via a magnificent plot curve and episodes soon get bloody with subtle yet unsettling violence, uncanny terror and a haunted house vibe stirred by scenes featuring faces staring through windows, candle-light illuminating figures in the dark and reflections of strangers who vanish when characters turn around to confront them. These coalesce nicely to make Symptoms an unforgettable yet ironically forgotten British horror, thankfully rediscovered then lovingly restored by the BFI and accompanied by some succulent special features on its Blu-ray/ DVD debut. 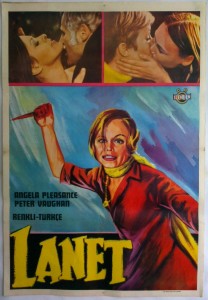 Extras include:
* “On Vampyres and other symptoms”: an excellent feature length documentary from 2011, directed by Celia Novis. Novis’ experimental film charts Larraz’s life from his Barcelona birth to becoming a comic book artist and subsequent journey into film-making. Incorporating interviews with comic art/ animation and stock/ film footage, Novis’ film is an absorbing, educational and poignant feature worthy of a stand-alone release by itself.

* “From Barcelona to Tumbridge Wells: The films of José Larraz” is a twenty five minute documentary/ part of the “Eurotika” TV series. This instalment reveals Larraz to have also been a Philosopher and Fashion Photographer, as well as a Director and Comic book artist, “whose Latin temperament brought continental fire to the British film industry”. It reveals Symptoms to have been financed by the Belgium publisher of the Smurfs, contains footage of Larraz discussing financial issues and troubles with the censors, then details the director’s return to Spain where he went on to make “crazy comedies” in the late 70s before moving onto more personal, surrealist features. Also included are short interviews with producer Brian Smedley-Aston and actresses Lorna Heilbron and Angela Pleasance who recall their memories the production.