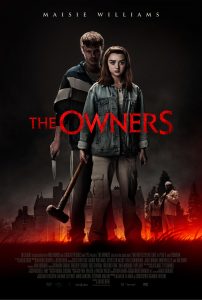 This month’s Venice Film Festival seeks to dodge the brunt of the Covid-19 crisis but it’s the first time an international festival has decided to go ahead since the pandemic shuttered competitions all around the world. Given these circumstances, so many films that would surely have gone down a treat with festival crowds have missed out. One of these is director Julius Berg’s (Netflix’s “Osmosis”) directorial debut, the psychological thriller The Owners.

Featuring an all-star cast, headed up by Sylvester McCoy (The Hobbit, “Dr. Who”) and Maisie Williams (The New Mutants, “Game of Thrones”), The Owners takes viewers back to 1990s rural England. Based on the French graphic novel “Une Nuit De Pleine Lune” by Belgian artist Hermann and writer Yves H. the film follows a group of childhood friends who think they’ve found the perfect house to rob. But this is a horror movie so of course, once they’ve broken in, stoned excitement quickly turns to frustration when the elderly couple that lives there gets home early and the tables are turned as dark secrets are slowly revealed and loyalties are put to the test.

To celebrate the release of The Owners (September 4), SCREAM sat down with Sylvester McCoy who shared his thoughts on minding the generation gap, his love for sophisticated Gallic cinema and Rob Zombie…

SCREAM: The film is set in the ’90s but it’s surprisingly timely for a number of reasons. Was that something that drew you towards the film?

Sylvester McCoy: Well the script originally comes from a Belgian comic book and Belgium is quite known for women getting locked up in basements where harsh things are done to them. And then the same things have also happened in Britain and America and everywhere, come to think of it. So it is definitely timely in that respect, but also I love (Claude) Chabrol’s films. He is a French auteur who made films like Le Beau Serge and there’s a touch of that in this film. Our director was French also and it was produced by a French company so it had that kind of Gallic sophistication in the storytelling. You thought it would go one way and then it ends up going another way and then another way. It was a real page-turner.

SCREAM: The director is French, as you say, yet he’s created very much a “Britflick.”

Well he knew what he wanted and he would never say no. He would just keep at it: “You’ve got to do this. We’ve got to do it that way.” So it’s always great to work with a director who knows exactly what they want. He was just such a nice chap that you always wanted to give him as much as you possibly could.

SCREAM: The script really underscores just how much of a generation gap there is. Was that idea particularly present on set?

No, not really. The thing about actors is that no matter how old or how young you are, you are all the same age, in a matter of speaking. When we all get together, we all belong to the same tribe and we hung out and had a great old time.

Maisie (Williams) was amazing, for example. She has been in the business for a long time. Obviously, she’s not been doing it as long as me as I have been doing this for 50 odd years now, but she has been acting for most of her life growing up and her experience and her expertise was astonishing. And the other guys are just great too so we all just had a lot of fun.

SCREAM: But did you never find it counterproductive spending so much time and having fun with the actors that you would be pitted against in the film?

Well, that’s part of the job really. Some actors have to be method actors and really go into it for a week or so beforehand and they produce great work but I work more on instinct. Somehow, I don’t really know what’s going to happen. It’s like I step off a cliff into the part and fly. Or hopefully I fly because sometimes I crash. But because it was a horror film and we were doing some horrible scenes, when we came off set, the first thing that we did was to try and make each other laugh as a kind of counter against the horror that we had just been through.

Rita Tushingham is from Liverpool and she’s just so funny. She and I became a comedy double act when we were off set and everyone thought that we should go on the road as a double act.

SCREAM: Talking of Rita, her character is very central to the plot and she suffers from dementia, alternating between fear, incomprehension and a coquettish sexuality. It must’ve been a challenge to find just the right balance when it came to establishing your relationship with her?

It’s a difficult relationship in the film but she just basically arrived and did it really. And it was so believable too. That was what made it so much easier for me to react to it. All I knew was that I had to love her completely. And in a way you could say that it is a very dark love story. My character wanted to do everything for her but he was losing her as well, which is the tragedy of Alzheimer’s. He was losing her a bit more each time and he wanted to hang onto her and what happens in the film was one way of hanging onto her because she has all these terrible hungers and needs and desires.

SCREAM: So did that result in quite a bit of improvisation?

In a way, but it was quite disciplined because we didn’t have a lot of time to get together but there were moments when we were allowed to bring stuff to the table. But I guess there’s always a time for improvisation in a way really.

SCREAM: The film has its fair share of graphic violence. When you read the script, did you think that so much violence was warranted to get the film’s messages across?

Yes. That’s what made it interesting really. When I read the script, I just kept going, “Oh my goodness. Oh my gosh!” I’d turn the page and, “Oh no!” So if it surprised me then I thought this must be great for an audience as they’ll be really surprised by the outcome. I really don’t think you could guess too early on what was really happening behind that steel door. At least I hope audiences don’t anyway. 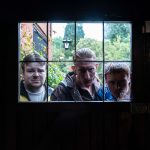 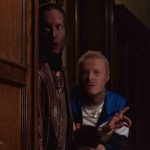 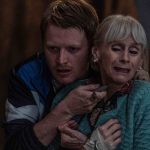 SCREAM: This film screams out to be seen by festival audiences so it must’ve been a real blow not to have been able to take it to festivals as a result of the Coronavirus crisis.

I know. I agree with you. It’s sad really. It was supposed to go to the Berlin festival I believe but maybe that was optimism on the part of the producers. But they obviously had that in mind and nobody knew what was coming around the corner: Something even darker than what we were filming.

SCREAM: Everything is up in the air in the film industry right now but is there anything that you have planned and hope to get working on in the not too distant future?

I do have another film coming out (hopefully) at Christmas which is very different to this film. It’s more of a gentle Christmas rom-com called Perfect Strangers. Frazer Hines and I play two old farts and it was quite fun and sweet really.

And then I was also supposed to be doing another film which I’m sure SCREAM readers will be interested in. It’s a horror comedy which was supposed to be shot in Hungary but that has been put on hold. I can’t really say anything about that but it’s a film that Rob Zombie’s set to direct. So we’ll just have to wait and see what happens with that project. Hopefully we’ll start to try making it again next year…

THE OWNERS is available in cinemas and On Demand and Digital this Friday, September 4.