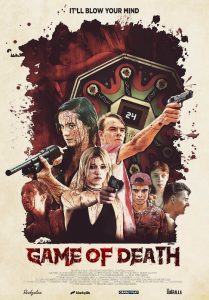 One particular film I’m confident will prove to be an absolute blood blast at the impending SXSW Film Festival is Sebastien Landry and Laurence Morais-Lagace’s Game of Death. Best described as Jumanji meets Natural Born Killers by way of Spring Breakers, the film stars Sam Earle, Victoria Diamond and Emelia Hellman and relates the tale of a group of partygoers who come across an obscure electronic board game that’s just begging to be played. As always tends to be the case, curiosity kills the cat and it’s not long before the band of youngsters find themselves fighting for their lives when it becomes head-explodingly apparent that the only way to beat the game is to kill or be killed.

Anxious to find out more about the duo’s Grand Guignol directorial debut, SCREAM caught up with Landry and Morais-Lagace (AKA Baz) along with the leading players Earle, Diamond and Hellman to find out exactly what kind of visceral treat audiences are in for at SXSW…

SCREAM: Although this is the first feature you’ve written and directed together, you’ve worked on a seriously wide spectrum of projects previously.

Sebastien Landry: Baz lived in Montreal and I lived in a northern city in Quebec and I met him about 8 years ago. We started to work together because Baz owned a website that worked on videos focusing on nightlife and the music scene and things like that. That was kind of my trip also so I joined him about 7 years ago. We started with nightlife content and music content and then, out of our love for movies, we shot a web series about 5 years ago and we’ve gone on to work on about 20 projects together. It’s just become really natural for us to work as a team.

Laurence Morais-Legace (Baz): Back in 2005/2006 it was more about being a host and getting into nightlife parties and just doing party stuff. But things slowly evolved for us and we became very good friends and ended up working so much together. Even when we aren’t working together we’ll chill out. Sebastian sees me more than his girlfriend.

SCREAM: So, after all this time working together, when did it dawn on you that you’d like to write and direct a feature together, and specifically this crazy, gory splatterfest of fun?

Sebastien: It was just a progression from what we’d been working on before really. We had done some music videos together and we decided we’d like to do something more fictive.

The first fictive thing we did was a short called La Chienne (Caged in English) just because we’re so interested in trying as many different things as we can. We don’t like to pigeonhole ourselves into one specific formula for everything we do. We like to explode into a different direction with each new project. When we did Caged, Seb asked me if I’d be interested in doing something in the gore universe and I was totally up for it. Caged got a bit of recognition at a few festivals and we managed to sell the short in France and that particular distributor said that there would definitely be a market for another film by us with a similar gore vibe. So we just sat down for a couple of weeks and came up with Game of Death. The premise evolved out of things like Jumanji and we’re really big fans of video games. We also love to play all those stupid drinking games. A big influence was a game called “Would You Rather.”

Baz: We also often play a game called Loup Garou which is about killing people so it all just evolved as a mix of all of the above.

Seb: The most direct influence was definitely Jumanji because it’s the most well-known movie/game that’s been made I think. But we didn’t want to watch that movie again as we wanted to make sure we came up with something entirely different and new. Many of our friends that are from the video game environment here in Montreal were involved. One of our friends, Sam Boucher, designed the game itself. We wanted to figure out exactly how the game would work for real so we thought it would be a great idea to get an actual game designer to bring in his expertise.

Baz: Another thing that that inspired us to make such a funny gore movie was that we wanted people to come out of the movie questioning themselves. We hope that people will end up asking themselves what they would do if there were thrown into that kind of insane situation. That was kind of the reason why we also use things like the Snapchat style video in the movie because we wanted there to be realism thrown in there too with these kids just chilling at a party and playing a game like any normal person would. Our first instinct was definitely to make it feel fresh and young and real. Kids and Spring Breakers were two films that I guess really inspired us too.

SCREAM: Turning to the actors, how did you approach what Baz just mentioned about keeping things palpable so that the audience feel really invested in this group of partygoers who have supposedly known each other for years, but who end up having their relationship turned on its head by playing the Game of Death? 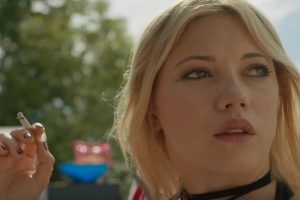 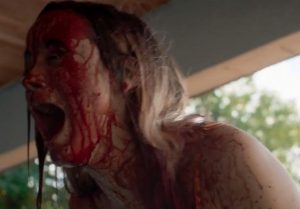 Victoria Diamond: We just fell lucky because the group that was cast just happened to have really great natural chemistry and we got along really well right from the first read. We were really different kinds of people but there was something really magical in the way that we’d been together and how well we got along. That made it really easy to just jump into the early party scenes where we had to improvise and mess around. And Baz and Seb also gave us a lot of freedom to fuck around and say whatever we wanted and get into our characters. We shot in chronological order so for the first few days we got to explore our characters and our character dynamics with each other and there was just that level of being so comfortable with each other straight away.

Sam Earle: That was definitely the vibe at the beginning. Then, when things started to go wrong, we suddenly found ourselves locked in a room, covered in blood and pacing around. One of my favourite things I remember was touching the prosthetic dead corpse of one of the people in our group and it was completely horrifying. And when things go wrong it was just a case of exploiting the different natural tensions between the group to express the survival instinct kicking in.

Emelia Hellman: There was so much playing the whole time. We did rehearse and we would do line runs together for some bigger scenes but we were just given such wonderful freedom to play off of each other and try different things. They would also keep rolling sometimes so we could improvise. All that stuff really helps to get you in the mode. And then the fact that we did everything in chronological order and being covered in blood ALL THE TIME (laughs) helped so much. It was all just really natural and organic.

SCREAM: The prosthetics in this film are out there; so out there that I’m guessing you worked very closely with the effects team from a very early stage just to be sure you’d be able to pull all these crazy, gory set pieces off.

Seb: We had many meetings with the effects team before the shoot because we wanted to hear their dreams of how they would love to see people die so we asked them to share all their dirty little secrets. We’re not professionals from the gore niche so we didn’t know the exact codes when it comes to gore and we had to be able to really put our trust in those poeple. We worked with The Blood Brothers and they were absolutely amazing.

Baz: And then Rémy Couture did all the prosthetics and the exploding heads and stuff like that. He was gantastic. 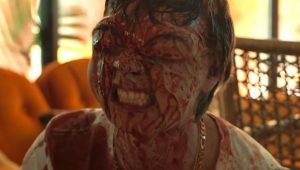 Seb: We are the biggest fans of being able to use prosthetics on set rather than doing everything in post. We wanted to do all of this explosive gore on set because we wanted it to be as real as possible. It was complicated but so much fun. And we have to congratulate the cast because they were literally covered in blood for like 20 days. For the first couple of days you could tell they were kind of pissed because they knew another 18/19 days of this were ahead of them but it wasn’t long before they just got used to it.

Emelia: It was crazy! I’ll never forget the first time we got shot in the face with a blood cannon and being in these scenes with all this blood and all this smoke and then seeing someone’s head start to bubble and explode. If you do theatre this is something you literally never get. Seeing all this stuff happen in front of me was like actually living the nightmare. As uncomfortable as it was with all the blood, and all the wasps flying around because of the heat, it eventually became like putting on a uniform each morning before going to war.

Victoria: It was exactly like going to war. We each had our own moment of getting shot with the blood cannon for the first time which was always on cam and it was like this big initiation moment. I remember that my character was supposed to be slightly less bloodied, because she was supposed to be a bit more sterile and removed, but I guess the blood cannon guy aimed the cannon a little higher than he was supposed to. So I was expecting a little spray but this giant blast ended up almost throwing me back in the end.

Emelia: Absolutely. Some of those reactions weren’t us acting. They were just borne out of our own fear and shock of what was really happening to us.

SCREAM: This game you’ve created for the film flings the door wide open for sequels. Surely you’ve toyed with the idea already.

Seb: We have been asked to write a treatment for a sequel. As bizarre as it might sound, we are doing a musical right now but once that is done I’m sure we’ll get back to the treatment for a sequel as we have a lot of ideas. I think our idea right now is not to have the actual board game that we’ve created evolve in sequels but to have the concept of the movie evolve into different worlds.

SCREAM: Aside from Baz and Seb’s musical, what have the rest of you got coming up some time soon that you can talk about?

Victoria: I just shot another comedy series for Black Pills which I guess will be coming out soon.

Sam: Just surprises beyond the horizon and then I’m also working on a little electro-pop project with my roommate so that’s my baby right now. 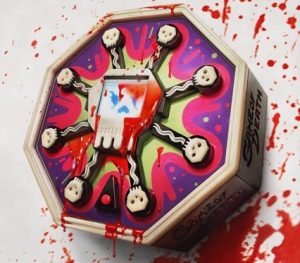 Emilia: I’m in a show that’s airing on CBC right now that’s called “Bellevue” and play a sixteen-year-old. I perpetually just play people who are younger and younger and my next role with be an actual baby. (laughs)

We’d like to thank the whole cast and crew for talking to SCREAM and urge festivalgoers to check out Game of Death when it screens at SXSW this March 13th, followed by two encore screenings on the 14th and the 17th. It’ll blow your mind!