Playing on our fears of being isolated and alone, the single-location thriller updates old haunted house and home invasion stories to include new, more inventive narratives, and it seems that filmmakers haven’t yet run out of ideas of how to shock the living daylights out of us. One particular film that is testament to the fact that small-scale thrills can oftentimes be much more effective is English director, Adam Randall’s (iBoy) latest thriller, I See You. 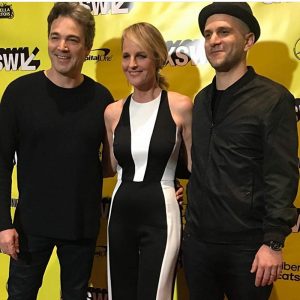 Set in a perfect small town filled with perfect families, I See You tells the story of a twelve-year-old boy who goes missing. Greg Harper (Jon Tenney), lead investigator on the case, struggles to balance the pressures of the investigation, which has brought to attention a similar case thought to be buried in the past, while finding a way to forgive his wife (Helen Hunt) for a recent infidelity. When a malicious presence manifests itself and puts their young son in mortal danger, the hard truth about evil in the Harper household is finally uncovered.

With the film having just debuted at this year’s SXSW Film Festival, Scream’s Howard Gorman caught up with Director, Adam Randall and the film’s two leads, Helen Hunt and Jon Tenney to dissect one of the most gripping, meandrous and craftiest mind bending movies we’ve seen in recent years…

SCREAM: You must all be excited about the premiere but I imagine you must also be harbouring certain fears, especially given the fact this film is brimming with so many twists and turns. I imagine you’re really eager to finally get to see how an audience reacts to each and every strategically devised plot device.

ADAM RANDALL: Absolutely. Really, you just want it to be surprising where it’s supposed to be surprising and that when the twists and turns come the audience is shocked by them. And then, at the same time, when it all adds up at the end, you just hope that it makes sense and that it is satisfying for the audience. I remember when I was working with the script at first and you ask yourself so many questions and a lot of the answers aren’t anywhere near as satisfying as the projection of the questions. I just really hope that when the answers come, the audience finds it satisfying and fulfilling.

SCREAM: For a film like this it’s very difficult for me to ask you questions without us going into spoiler territory but, as the film is told from two different perspectives, I wanted to ask the cast to walk us through the experience and the challenges of performing within two parallel stories?

HELEN HUNT: I’d actually say that that challenge was more specifically Adam’s than it was mine, at least in my opinion. He and I would check in and we would make sure that the choices that I was making made sense, both in real time and also when you look back on it. But other than that, it was totally the director’s problem, right Adam? (laughs) But he was really fun to work with and I was always excited in the hope that he would be able to pull off some pretty hard to achieve things in terms of what the audience would think and how confused they’d be.

SCREAM: And did you shoot both perspectives at the same time?

AR: We tried to shoot the different perspectives as closely together as possible due to the tight schedule of the shoot but at the same time we really did try to keep the two stories and the actors as separate as we could throughout the shoot to keep things as authentic as possible.

JON TENNEY: From an actor’s point of view, what Adam was particularly concerned with was the actors being truthful and honest in the circumstances and it was great to just worry about that because the real lion’s share was in Adam’s garden.

SCREAM: A key theme throughout is the theme of trust and also confiding in the people we love the most and the film left me feeling like the only person we can really confide in is ourselves. The story highlights how even a seemingly normal family, in a seemingly perfect town can be harbouring some of the most horrific secrets from each other which is just terrifying. Was this an aspect you really wanted to shine a light on and for people to take home with them? 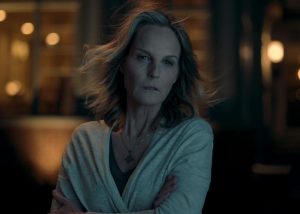 HH: For me hearing that is just. I mean, if I were Adam, that comment is like a dream come true. I really think that is a pretty good take-away from what the film was trying to get at.

AR: I guess you’re right, although maybe we looked at it in slightly a more positive light (laughs). I certainly made judgements about the characters when I first read the script. I was judging them constantly; as you do with everything in life. And the script sort of throws that back at you and the assumptions that you make about people based on very little information, which can so often be wrong. I remember the first day after having read the script and things suddenly started to sink in and I was like, “Oh my God! So that’s why Jackie (Helen Hunt’s character) was thinking like that.” So I thought that kind of narrative was something really interesting to try to translate onto film.

SCREAM: The pivotal plot device in the film is the relationship between the family members. I thought the relationship between the Jackie and her son, Connor (Judah Lewis) was particularly crucial, not just in terms of the performances but in terms of really hitting the twists in the tale home. That in itself must have been particularly perplexing.

HH: I guess I just prepared for it like I would anything else. In between I had an eye on what Adam was trying to do with the genre and surprises but then, for the most part, it involved doing what you do most of the time as an actor. You ask yourself, “Why do I want this?” “Who is this person to me?” And then playing someone who cares about their own kid is not hard as I live that all the time. So the genre doesn’t really come into it when you’re doing most of the work and you lift your head up from all that and just say to yourself, “How do I help this filmmaker craft a really surprising and scary movie?”

SCREAM: When you shoot a film with so many twists and turns, you have to strike a perfect balance between keeping everything unpredictable whilst not overdoing it with the red herrings so as to keep the audience intrigued and to make sure they don’t feel swindled in any way.

AR: It was definitely a challenge. I think the big twists in it were in the script so I can’t take the credit for those. That was all Devon Graye’s doing. But how we achieved that and how we made it feel believable and satisfying, that was the real challenge for me. And also, every time you read the script and analyzed it and broke it down, you kept asking yourself, “How does that make sense? Surely the audience would know that!” And then there were also moments of deep clarity like three days before the shoots where I would be like, “Holy shit! This doesn’t make any sense at all. We’ve got to change it.” 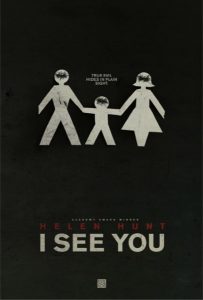 JT: Yes, that was a lot of that. Adam would sit with the actors and talk to them about their parts and about literally every line in each scene as there were things that came up because we kept bringing our perspectives to the story because we’d really been reading into our characters and discovering things that maybe he hadn’t.

AR: Absolutely! So that was really challenging, but the joy of making it was creating this puzzle and trying to envisage how the audience was going to react. And then I’m hoping that people will want to go back and watch it a second time to try and spot things that maybe they didn’t notice the first time round as there are so many little misdirects in there…

I SEE YOU will enjoy one more screening this March 15 at SXSW so if you happen to be around those parts, we can’t recommend it highly enough.