The Swedish sci-fi thriller Origin has secured distribution in North America and will be released on VOD on 13th December. The film has done extremely well on the festival circuit and managed to pick up a few awards, including Best Sci-Fi at the Sydney Indie Film Festival in October and Best Actor in a Feature at the Buenos Aires Rojo Sangre film Festival in November. 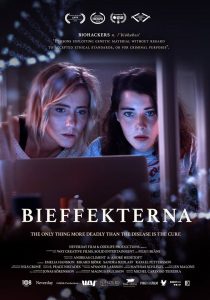 Ambitious science student Julia and programmer Rebecca are trying to make cells age slower through their research in biohacking. They are on the verge of a breakthrough when they discover Julia’s boyfriend, Erik, has been diagnosed with a terminal illness. As he gets worse and worse, they see no other option than to break moral boundaries. In secret they build a lab in their apartment and start experimenting – with Erik as a human guinea pig.

At first they seem to have found a cure, but they soon discover that his cells show signs of unexpected side effects. They have managed to enhance the body’s properties. But what at first seems like something fun and exciting turns out to be far more dangerous than they ever had imagined.

The idea of playing god and messing with science has always been a prominent concern of horror and sci-fi, but Origin’s idea about slowing down the ageing process sounds mighty intriguing, so we’re hoping that it makes its way to the UK very soon.

Check out the trailer for Origin below, it depicts the slow escalation of the film’s events, but still succeeds at maintaining a certain level of mystery so that all is not quite revealed.

Be sure to catch Origin when it arrives in North America on 13th December 2016.