Last year we told you that Dario Argento’s Suspiria would be receiving a 4K restoration and release in 2017, and now we have news of the first release. Unsurprisingly, as the film’s 4K restoration premiered in Berlin earlier this year, the film’s home video release will be hitting Germany first on 15th May 2017. Hopefully it will head to more countries soon after. 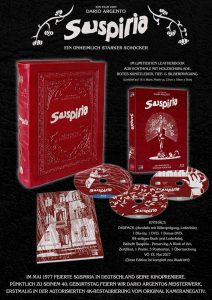 The Suspiria 4K restored collection will be released in Germany on 15th May 2017.