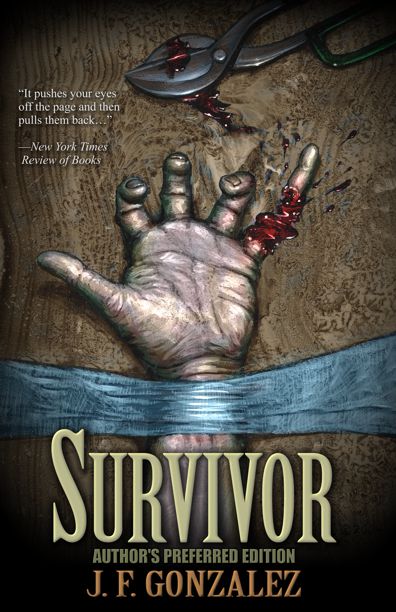 The first two chapters of Survivor bring genuine feelings of unease, they only touch on the horrors that surface later in the book but a bondage scene where a young woman’s excitement soon goes awry and a couple stalked along the interstate were very unsettling.

Brad & Lisa set off for a weekend break, after a rest stop they are followed by a crazy stalker in a pickup but even more surprising is when they are pulled over by the cops and a citizen’s arrest is invoked. Brad ends up in jail waiting for the court appearance on Monday and Lisa is left waiting in a hotel, not long after to her horror she is kidnapped and told she is going to star however briefly in a brutally extreme hard-core snuff film with a complete sadist named Animal and it doesn’t get any better for Lisa.

Survivor amidst all the horror is actually a pretty decent thriller, the nature of the story presents some horrific scenes, you can’t get more bloody and outrageous than some of the stuff on offer but it lacked some of the bared to the bone tension that you get in something like The Summer I Died by Ryan C Thomas. Survivor would have benefitted from a tighter editing, it was a little over descriptive in places it didn’t need to be which padded the story unnecessarily. That said I did read this in two days, it’s certainly a hard hitting story about some seriously ruthless people with inhuman desires that border on disbelief. And you can’t stop reading if only to see certain people get what they deserve.

A story definitely not for the faint hearted centred on an underground hard-core S & M culture, there is extreme torture, sexual violence & rape, cannibalism, necrophilia and other stuff I daren’t write down, suffice to say it’s very graphic. You’ll either love it or hate, I don’t think there will be an in-between but be prepared if you attempt to read it.

The ending was excellent a more unlikely assassin you won’t see again but the story primarily was one of betrayal in two unbelievable ways and a profound sadness that you’ll understand if you have read Survivor.