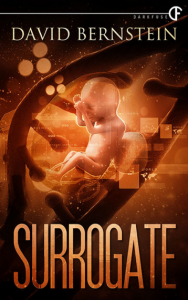 Surrogate by David Bernstein certainly explored an interesting topic but overall I felt there were a few issues that hampered the flow in an otherwise rocket paced novella.

The story opens with Rebecca Hardwick doing some gardening, then a second later she gets shot in the stomach, which I thought to be a bit random especially when it wasn’t mentioned again. The focus was then diverted to the fact that she could no longer have children as a result of the injuries sustained.

After much heartache the Hardwicks, Tom & Rebecca are presented with the proverbial cloud with a silver lining, when Dr Kotrich offers them the opportunity, at a cost and involving an extremely clandestine operation, to create another version of Rebecca. A clone, this clone can then be impregnated and used to give birth to a child which will in effect be theirs, with their DNA and their blood. And in just 15 months’ time they are the proud parents of ‘adopted’ baby Anna.

Jane Nurelle is an abused spouse, who just as her waters break, runs into the stumbling block that is her husband and his outright refusal to get medical help. If any bloke deserved a damned good slapping, this is the man and he does just get what’s coming to him, Jane drives to the hospital and is involved in a fatal accident. And this is where it got a bit messy for me.

Jane’s soul or something of that bearing ends up in the Hardwicks clone and it’s then an escape worthy of Clint’s breakout from Alcatraz with a little help from the A-team. Jane then goes looking for the one thing she’s desperate to find, her baby.

Surrogate is a well written, fast paced ride that certainly doesn’t leave a happy ending for everyone, enjoyable but with a few unbelievable moments in there.