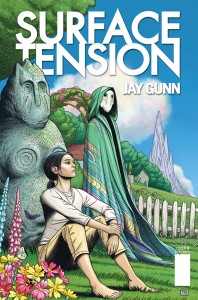 The trope of the zombie apocalypse has always enabled writers to explore a wide range of human fears, from racism, consumerism and, most importantly, the anxieties attached to our own mortality. But with Surface Tension – the new graphic novel from Titan Comics – creator Jay Gunn explores something completely different, examining the adverse effects that humans have had on the planet, and ultimately, whether or not we deserve to live after causing so much needless destruction. It’s an interesting premise, and one that Gunn explores with an intelligence not often seen in comics within the genre.

The story takes place after 99% of the population is infected with a disease that causes them to walk into the sea and drown. Two survivors, both infected with the aptly named “sea-sickness,” return to the tiny island of Brieth with no memory of what has happened to them, causing those on the island to question how and why they have managed to survive. 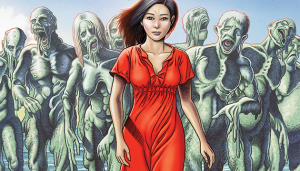 But their return to Brieth, the new Eden of Gunn’s post-apocalyptic world, sets off a chain reaction that includes flesh-eating monsters, sentient life forms that resemble coral, and naturally, a whole horde of drooling blue-skinned zombies.

Jay Gunn is a discerning writer, throwing up a bevy of complex moral problems for the reader to consider. Like the best science fiction stories, Surface Tension is a book of ideas, with some genuinely innovative moments. In places, the narrative suffers from this, particularly in the third act of the story. Here, the narrative is weighed down with exposition, labouring some of the social commentary that was so elegantly paced in the first two thirds of the book. But this is only a minor criticism. If this exposition is the price to pay for such a deep and complex narrative, then the pros far outweigh the cons. 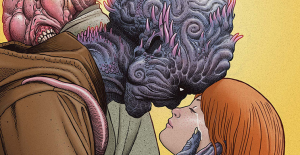 Gunn’s art is a cross between Hayao Miyazaki and Francis Bacon – equally whimsical and disturbing. This is a book where bodies melt and collapse, tumbling into puddles of grotesque, devolved skin. This juxtaposition is both startling and refreshing, heightening both without detracting from the other. Colours are also beautifully used, especially in the Eden-like landscapes of Brieth. With its deceptively tranquil beaches and sunsets, this is an island that the reader will long to visit – even when the inhabitants are deliquescing into pools of hideous, jelly-like flesh.

Surface Tension is an interesting book, one that pushes horror comics into new and exciting places. Though sections of the artwork may be too grotesque for some readers, this is a book that deserves to be read and considered critically, warts and all.