Supernatural Comic Darkness Visible to Get the TV Treatment

The supernatural comic series Darkness Visible will be adapted for TV courtesy of IDW Entertainment. The series follows an alternate reality where the Allied powers were helped by demons to win World War 2, thus agreeing to share the world with a supernatural race. Cut to 60 years later and the co-existence is going less than smoothly, with endless conflicts waging between the two races. Things get particularly complicated for Detective Daniel Aston when a demon makes his soul its new home.

Despite its fantastical and supernatural elements, there is a scary similarity between this make-believe world and our own. Demons or no demons, does terrorism and conflict not dominate our world, too? 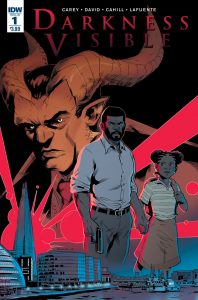 When speaking about the series, Mike Carey – a co-creator of the comic series ponders the same when he says:

“Darkness Visible was an opportunity to create a supernatural thriller with a razor-sharp political edge. […]It’s only become more topical since Arvind [Ethan David] and I first dreamed it up. Now, working with professionals who know and care about story, I’m very excited to bring Darkness Visible to the screen and look forward to working with IDW, Intrepid Pictures and my good friends at Ideate Media.”