Making its way to DVD and Blu-ray next month from Dark Sky Films is comedy-horror Another Evil, which went down a storm with audiences and critics alike following screenings at SXSW, BAMcinemaFest, and the Fantasia Film Festival. 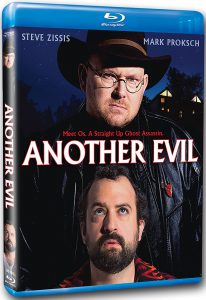 Official synopsis:
“After encountering terrifying ghosts in their vacation home, modern artist Dan Pappadakis (Zissis) and his wife, Mary (Irwin), consult an exorcist. Unsatisfied with the exorcist’s verdict – that the spirits are harmless and ignorable – Dan goes behind Mary’s back to seek a second opinion and secretly hires the bizarre Os Bijourn (Proksch), who promises to get rid of the beings.

Os is going through a divorce and is in desperate need of human companionship. So he suggests he and Dan spend a week together in the vacation home exorcising the “EFD” (Evil Fully Determined) beings. Dan soon realizes that ridding the home of evil won’t be so simple.

Implementing a variety of increasingly outlandish (and dubious) devices to battle the ghosts, Os tries to befriend Dan almost as relentlessly as he tries to fight the phantoms. However, things turn suddenly serious when Dan realizes that a great danger lurks within the home.”

Writer-director Carson D. Mell makes his feature debut with Another Evil, having previously written episodes of Silicon Valley and Eastbound & Down. The film hits DVD and Blu-ray on July 18th.