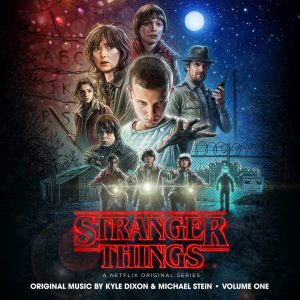 The first volume of the soundtrack to Stranger Things was released digitally on 12th August and a CD is set to follow on 16th September. The second volume will be released digitally on 19th August and the CD will follow on 23rd September. Lakeshore Records have also confirmed that there will be a vinyl release of the OST, but there is no release date set.

When speaking about the soundtrack, one of the show’s composers Michael Stein (from the electronic group S U R V I V E, whose sounds you may recognise from The Guest) said, “We discussed having a classic tone and feel to the music for the show but being reserved enough that it wasn’t ’80s cheese, while offering a refreshing quality so that it felt modern. This was one of the qualities that drew them to our music in the first place. Having a familiarity with classic synths worked, but with an overall forward thinking approach.”

We adored everything about Stranger Things; the story, the cast and the wonderfully 80s tone were all pitch-perfect. Of course, the synthy retro soundtrack was also amazing. A second season of Stranger Things has been confirmed, but again, no date has been set. The end of the first season left a lot of questions un-answered, so we can’t wait for the Spielbergian nightmare to return to our screens.

Synopsis:
A love letter to the supernatural classics of the 80’s, Stranger Things is the story of a young boy who vanishes into thin air. As friends, family and local police search for answers, they are drawn into an extraordinary mystery involving top-secret government experiments, terrifying supernatural forces and one very strange little girl.”