A hurricane has struck Wyvern Falls, as it did decades ago, and brought a body back from the past. A group of teenagers discovers the skeletal remains holding an occult medallion. They call trusted local detective, Easton. The detective and the kids find themselves quickly embroiled in intrigue. This town has dark secrets that have been handed down from the past. The past seems to be catching up with the town, as strange things are happening. A murder suicide is just the tip of the iceberg.

To try and make sense of the happenings, Detective Easton seeks out Tucker, the all-knowing librarian (which as a librarian, I liked), to find out more about the dark history of the town and the Order that still exists. A mysterious descendant of Aleister Crowley is overseeing all events in the town. He employs a man known only as the Weatherman and an enforcer, Razor, a Latvian assassin who cleans up lose ends. Crowley is part of the Order of the Golden Dawn. The Order is alive and well in Wyvern Falls and anyone could be a cult member. 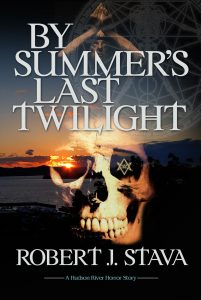 We follow Detective Easton and another thread involving the gang of teenagers. The teenager thread definitely brought The Goonies to mind, which is never a bad thing. In fact, the teens refer to themselves as the Half-Moonies. It was a diverse group, which was good to see for a change, and they play a significant and important role in the story.

The history of the Crowley story sets up the present day, but it provides too much information and detail to keep up with and slows down the present day tale. Throughout the story there are lots of threads, and more than a few too many Qabbalic mysticism references. I did enjoy the conspiracy aspects and mystery over who in the town was in the cult. There were definite moments of tension but not a ton of horror.  The pace picks up for the final quarter of the book, and the supernatural aspects are ramped up for the inevitable showdown between Easton, the teenagers, and the cult. While I like the premise, the pacing and length of the book made it not quite work for me.