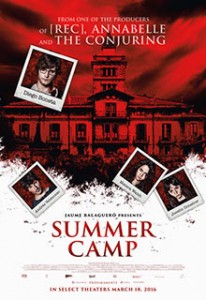 After receiving a limited theatrical release in March, Summer Camp is gearing up for its digital, DVD and VOD release that has been set for 2nd August 2016. The film follows a group of camp counsellors in Spain who come face-to-face with a virus that sends people a bit mad. Think 28 Days Later meets The Crazies and you’ll be on the right track.

Summer Camp stars Jocelin Donahue (The House of the Devil), Diego Boneta (Scream Queens), Andres Velencoso, Alex Gonzalez and Maira Walsh. You can watch the trailer below, which shows the beginning of the rage-infused virus and the imminent plan of escape from the summer camp. It’s packed full of jump scares and angry infected folk.

Summer Camp can be yours to own from 2nd August.