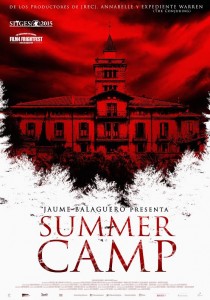 This Saturday, October 10th sees the 48th Sitges – International Fantastic Film Festival of Catalonia play host to Alberto Marini’s directorial debut, Summer Camp. [REC]’s very own Jaume Balagueró has been a regular cohort of Marini’s on a number of occasions and had no doubts in serving as Executive Producer to support his long-time friend as he takes the plunge as first-time director.

Brought to us from the producers of [REC], Annabelle and The Conjuring and starring Diego Boneta, Jocelin Donahue, Maiara Walsh and Andrés Velencoso, Summer Camp defies horror conventions and is guaranteed to surprise and terrify audiences as the pursuer becomes the pursued, the cat becomes the mouse.

To celebrate the film’s impending Sitges screening a brand new full-length trailer has today been unleashed and gives you a pretty explicit idea exactly why we gave it the full 5 star treatment: (Review here).

We’ll leave you with the trailer and you can also read our recent interview with Marini over here (if you haven’t already).

Synopsis:
Four American counsellors at a European summer camp must deal with the outbreak of a rage-inducing plague. With only a matter of hours before the children they are meant to be supervising arrive, the group must survive the night and stop a bigger nightmare.