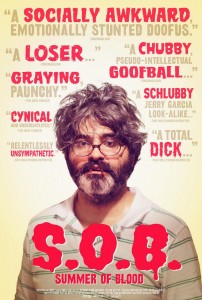 Synopsis:
Summer of Blood follows Onur Tukel as Erik Sparrow as he meanders through life, struggling to find someone who can accept him for his cynical and sceptical outlook. After being dumped by his long-term girlfriend Jody and failing to impress any further potential sweethearts, he meets a mysterious stranger who changes his being entirely.
Summer of Blood wastes no time in setting a sarcastic and tongue-in-cheek tone which it successfully maintains throughout its short 86-minute runtime. Erik expresses his desire to write, direct and star in his own film; something he believes must be easy because Tyler Perry can do it and his films are terrible. However, he hasn’t even seen a Tyler Perry film. It’s a simple, self-reflexive scene where director Onur Tukel pokes fun at himself in a similar fashion to Woody Allen. Like Woody Ellen’s film characters, Erik is self-deprecating, pessimistic and unlucky in-love. In a particularly comical conversation, his ex-girlfriend declares she’d, “rather mount a chainsaw” than get back in to bed with Erik. Ouch. All of this works in the film’s favour and helps cement it as an intelligent, refreshing and hilarious horror-comedy. It hits all the right keys and Tukel scores a hat-trick as he proves that he can be a genuinely funny and smart actor, writer and director.Many scenes of the film pin the audience as a fly on the wall in conversations between Erik, his various work colleagues and prospective dates. It is made painfully clear from early on that he is the embodiment of a negative, outspoken and generally quite awful human being. However, thanks to the film’s intelligent direction, we are allowed to slightly empathise with his character; if we delve a bit deeper we can see that he is just a product of a scaremongering, money-hungry society. He describes his dislike of being a cog in a machine, and his ultimate refusal to conform to the norms of society manifests itself in his vampiric transformation. He is now free to suck the life out of those who drained the life out of him.When Erik undergoes his bloodthirsty physical makeover he is transformed from an average Joe in to an undead sex god. The ladies who shunned him are instantly besotted and beg to be bitten when they discover how wonderfully he now performs in the bedroom. Vampire films are filled with erotic and sexual imagery and Summer of Blood is no different. Eric is a sexual creature who rejects monogamy and fidelity, giving in to his deepest and darkest desires as he so wishes. A playful soundtrack accompanies much of the film, emphasising its light-hearted mood and intention to be fun and whimsical. We aren’t mean to take much of the on-screen action seriously and even when women are painted in an awful light – we want more than good sex, right? – it’s hard not to fall for Summer of Blood’s charms.

There is a playful air surrounding Summer Of Blood that lingers until the closing credits. Erik’s frequent and witty one-liners are brilliant, again preventing us from truly hating him. Onur Tukel truly carries the entire film on his shoulders and it’s a joy to watch. We are given a bloody hilarious vampire flick which ticks all the right boxes for fans of vampires, horror and comedy alike.