Life on the road can be tough for touring bands. It gets a whole lot tougher for Two Tons of Dirt, when, nearing the end of their grueling tour, a shortcut down an alley leads to two of the band members being attacked by a small flying something. One of them gets bitten. Following the bite, Dan is never the same. He has painful headaches and a buzzing in his head. He discovers that the only thing that makes the pain go away is blood.

I really liked getting to know the characters, their day to day touring routine, and the cramped and miserable living situation on the bus. You could feel the monotony and the stress that plagues people who are cooped up together. Following Dan’s encounter with the creature and his growing infection, the tension ratchets up. It was fascinating to see how he dealt with his symptoms as they progressed – not knowing what was wrong with him, trying to find solutions and alternatives to stop the pain. You see it from his point of view, and it’s not that all of a sudden he’s a monster. His growing need parallels that of the drug-addled drummer in the band. The final, shall we say, symptom of his infection was completely unexpected, nasty, and an interesting plot development.

The second major character, aside from our main protagonist, Dan, is his best friend Ray, who is possibly the nicest person in the world. He sticks by Dan no matter what and is beyond helpful to him, accepting whatever is happening to Dan with ease. It seemed a bit too easy. I’m sure their relationship would have splintered having gone through what they went through, or at some point Ray would say enough is enough. 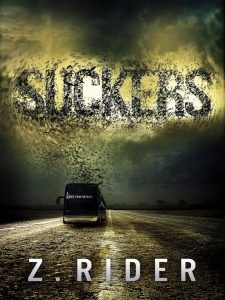 The power behind the first two-thirds of the book comes from the story of a major outbreak being told through the viewpoint of a single sympathetic character. Dan’s struggles to cope with his affliction endear him to you and carry you through to the final segment. There is not a huge amount of violence or gore throughout most of the book. It’s sporadic, but when we do get some, the author delivers. There is a truly grotesque cat scene that is not for the faint-hearted. For the final third of the book, more characters come to the fore as the outbreak spreads and it becomes something of a siege narrative. The spread of the infection across the country is told through news reports. It doesn’t have the same impact as we’re not seeing it firsthand. It loses a bit of the personal touch as the story gets diluted. If the scope had stayed small and focused on Dan throughout, it would have been more chilling. It loses some steam, and I wasn’t too gripped by the ending.

I like the way the author plays with our expectations of vampiric tales and makes this something totally new. I would recommend this. The first two parts of the book are exceptional, but it just doesn’t quite come together at the end.