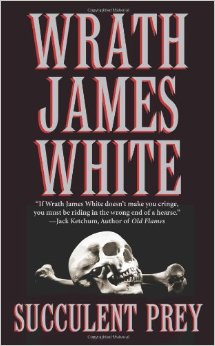 Succulent Prey is an insanely fast paced gruesome killfest, containing some of the most graphic descriptions of a cannibalistic killer I’ve read, all the killings go hand in hand with a sexual appetite that well … just isn’t right.

Joe, our protagonist was kidnapped and just a little bit tortured in his childhood. He believes that these events have shaped him in a way that you might call a little bit concerning and now he has urges. Cravings even and driven by a compulsion to kill, eat human flesh and all this is grossly entwined in violent sexual desires. He thinks he may have been “infected” by the serial killer who kidnapped him. He desperately wants to resist the urges and find a “cure”, if every addict reacted like this the world would be a living hell with only the strongest surviving.

Succulent prey escalates rapidly to a level that was a good deal higher than most are willing to go. There’s obviously a market for this sort of stuff but this just purely concentrates on shock value and raising that bar as high as the author can get it. It’s bloody, gory, stomach-churning at times and way more than just sick and twisted. Tongue in cheek extreme horror this may well be but it’s the relationship between sex and the cannibalistic side of the story that was a touch worrying.

I actually read this book on holiday, sunbathing by the pool and left it in reception in the book box, there’s going to be a big shock in store for anyone picking this up.