A stunning new poster has been revealed for The Endless, the next genre-defying feature from the directors of 2015’s monster-drama Spring. The poster beautifully teases the film’s otherworldly aspects in a winding series of colours that meander between space and earth. 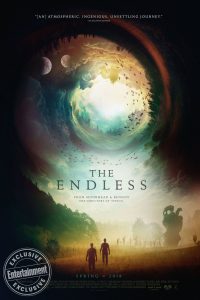 In The Endless, two brother’s return to a mysterious cult, only to realise there may be some truth in their ethereal beliefs. The brothers are played by the film’s directors Justin Benson and Aaron Moorhead. Justin Benson has also written the script for the film.

The Endless additionally features Callie Hernandez, Tate Ellington, James Jordan and Lew Temple. Expect and hope for the film to secure a release date for some time this year.