Bug-centric B-through-Z-movies have been raiding screens since forever, largely down to the fact that entomophobia is something so many of us share. Despite such a common fear of insects, most creature features are far more interested in having as much fun as possible than trying to scare us half to death, with the likes of Tremors, Big Ass Spider and Arachnophobia springing to mind. Stung pretty much falls into the same category as it’s a particularly playful affair but, once we get past the saccharine sweet scene-setting raillery, director Benni Diez indulges in some particularly gruesome effects that aren’t all too common when it comes to bug flicks.

The glitterati garden party setting and the gore factor are somewhat reminiscent of Rec 3, a film I think I got on a lot more with than most people, whilst the satire and larger than life characters bring films such as Tremors or Gremlins to mind. Although Stung might not fly quite as high as the latter couple of films, Adam Aresty’s screenplay has a few cunning tricks up its sleeve resulting in a satisfyingly rare breed of entertainment. The script is also bolstered by a fantastic cast who all strike just the right comical tones to make sure Scary Movie style spoof humour is avoided like the plague.

The leading couple, played by Matt O’Leary and Jessica Cook, didn’t particularly click with me in the first scene when they drive up to the mansion in their Haute Tension-esque van, but I have to admit that I ended up warming to them so much more than I first expected to. After a shaky start they end up sharing a charming bit of cheesy chemistry – and it was that cheesiness that I didn’t appreciate at first I think – and it’s not long before you realise how their banter fits right in with the tone Stung is trying to set. There’s also an amazing turn from Clifton Collins Jr. as the particularly peculiar Sydney whilst Lance Henriksen is as irresistible as ever as the petulant yet virtuous Caruthers. And this review wouldn’t do the film justice without a plug for Larry the keyboard guy (Daniele Rizzo) who is absolutely indispensable at all weddings, christenings and birthday celebrations.

What is particularly evident in Stung is that Diez has had more than his fair share of experience in the SFX department. The swarms of mutant wasps, both large and small, are passionately rendered as they flutter and rampage their way through the party-scape. Delving much deeper into the effects side of things would give some important plot details away but let’s just say there are some fantastically shuddersome creature creations on show, much akin to the stellar work produced on films like The Thing and Toby Wilkins’ Splinter. What’s even more satisfying is the fact that, most of the time, the creatures really don’t have that laughable pixelated look about them.

What makes for an even more engrossing experience is Antonio Gambale and David Menke’s acutely articulate score which hits all the right notes and creates just the right atmosphere at just the right times; it’s like Peter and the Wolf for the new generation.

In a chrysalis, whilst Diez plays a lot of the film by the book, taking cues from many a classic critter movie of yesteryear, Stung makes wise use of some bugged out – yet strangely satisfying – twists that result in a genuinely engaging and entertaining piece of cinema. And, with a bit of luck, we might not have to wait until the cows come home before the wasps comes buzzing back for a sequel. 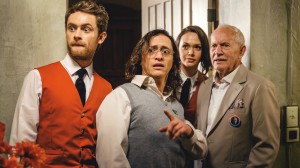 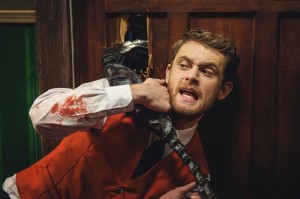 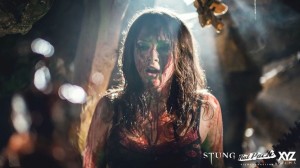