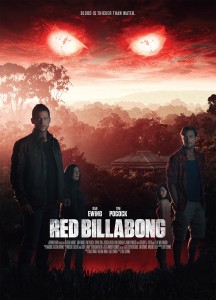 Having been held up in post-production for while, Aussie creature feature Red Billabong is almost ready to be unleashed, hitting Australian cinemas in July. Ahead of then, Sparke Films has released a handful of new stills, plus a brand new trailer which gives us a pretty good look at its monster, who looks not entirely unlike Swamp Thing. Only bigger. Much bigger.

The feature debut of director Luke Sparke, the action-packed horror thriller stars former Home and Away man Dan Ewing, Tim Pocock (X-Men Origins: Wolverine) and newcomer Sophie Don. Here’s the official synopsis:
Nick Marshal and his estranged brother Tristan are drawn into a world of secrets and lies when their grandfather’s enormous outback property passes into their hands.  Old wounds are reopened as friends arrive to visit and strange things begin to occur around the river’s billabong water hole. After visits from an old aboriginal family friend and an unscrupulous property developer, the brothers wonder just who is on their side.

Night falls, tensions rise, friends go missing, and past misgivings come to a head. Tristan finds himself not believing his brother who is convinced something dark is at work on the grounds. As they part ways to look for their friends and answers, revelations are

unearthed that will change the course of their lives forever. Every Australian may have heard a story of a terrifying outback monster – the Bunyip – but is it just a story? Could it be real?

Going by this trailer, the answer to that last question appears to be a fairly solid ‘yes’.