Strangers Come Calling in the Trailer for Minutes to Midnight

Strangers come calling in the intense trailer for the slasher flick Minutes to Midnight. The film follows a group of friends hoping to celebrate the New Year in a fun – but peaceful – fashion, heading to a cabin for the ultimate party. Unfortunately, their plans are ruined when they are warned to leave and avoid an imminent storm, but the storm is the least of their worries when masked strangers make their night hell.

It’s a familiar concept, but the trailer for Minutes to Midnight is a fun one. We all love to see a group of people tormented by masked killers and this one looks like it’s going to be a tense mash-up of Friday the 13th and The Strangers. 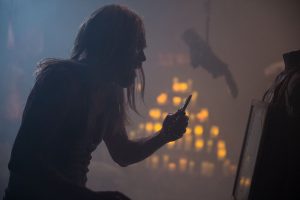 Minutes to Midnight is on VOD July 3 and DVD September 4.